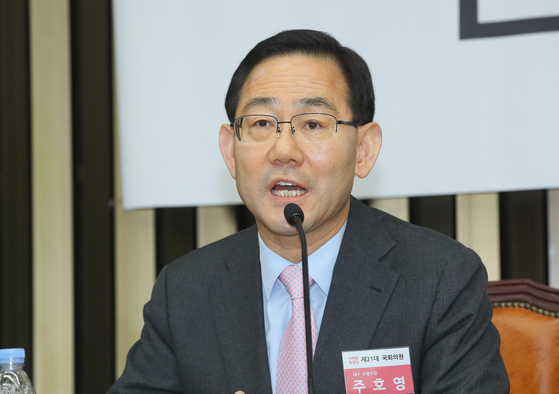 All 84 lawmakers-elect of the UFP attended the voting, and the team of Joo and Lee won 59 votes to win.

Joo, 59, is a veteran politician of Daegu. Since winning his first term to represent the Suseong B District of Daegu in 2004, he was reelected for four consecutive terms. His fifth victory last month was from Suseong A District of Daegu.

Although he is a politician from Daegu and North Gyeongsang, a traditional stronghold of impeached President Park Geun-hye, Joo is known for his disparity with the failed leader. In the past, he previously served key posts of the conservative opposition party including chief policymaker.

Rep. Lee, the newly elected chief policymaker, is a public servant-turned lawmaker. After ending his career in the government as the second vice minister of the Ministry of Home Affairs in 2011, Lee was elected a lawmaker in 2014 to represent Chungju of North Chungcheong. He was reelected for his third term in the district last month.

Joo is tasked with reinventing the conservative opposition party in the aftermath of its humiliating defeat in the last month’s general elections. His negotiations in the legislature will also be unprecedentedly tough as the UFP is largely outnumbered by the ruling Democratic Party (DP).

“I feel a heavy responsibility to take this difficult job at this difficult time,” Joo said. “Our party has reached rock bottom. I feel desperation because if we don’t turn around within one to two years, we will never win another presidency and we may disappear from the history.”

The UFP won 84 districts last month. Even after a merger with its satellite Future Korea Party (FKP), it will only have 103 lawmakers in the 300-member legislature.

The DP on Friday approved a merger with its satellite offshoot Citizen Party (CP) to become a party with at least 177 lawmakers.

While Joo and Kwon both said the UFP will immediately start a merger process with the FKP, it remains to be seen if the satellite party will also agree. Speculation is growing that the FKP, which won 19 proportional seats, may form a coalition with the People’s Party, which won three, to become an independent negotiation bloc. A negotiation bloc requires at least 20 lawmakers.

“It is highly possible that the UFP and the FKP will start discussing a merger,” a key UFP official told the JoongAng Ilbo. “But some pointed out that we need two opposition parties to have stronger opposition voices in future negotiations on organizing Assembly leadership and committees, reviewing contentious bills and nominating the head for the new investigative agency for senior public servants.”