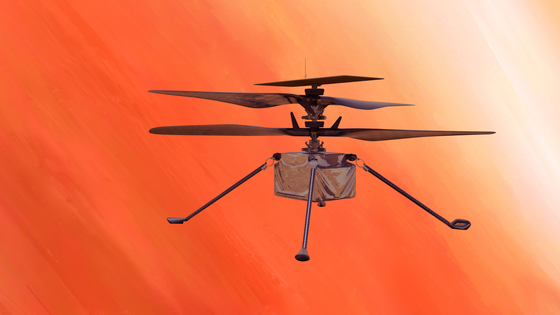 Ingenuity, the Mars helicopter, will have its first test flight on Wednesday. [NASA]


Can helicopters fly in the gravity of Mars, not Earth? Space helicopter experiments are in progress 225,000,000 kilometers (140,000,000 miles) away around Mars. The National Aeronautics and Space Administration (NASA) is testing a take-off by the space helicopter Ingenuity on April 14. The experiment was originally scheduled for April 12, but NASA delayed the schedule as the initial test did not succeed.

Ingenuity was loaded on Perseverance, which landed on Mars in February. If the experiment succeeds, it will be the first helicopter that successfully takes off in the gravity of Mars.

Conditions to take off from Mars are extremely harsh. As the air density on Mars is one percent of Earth, it makes it harder for the helicopter to lift. The elevation level of a helicopter that lifts by rotation of its blades is closely related to air density.

To overcome the severe conditions, Ingenuity’s two blades are made of light carbon fiber. The blade rotates 40 times a second to lift the vehicle, eight times faster than conventional helicopters. The weight of the body is 1.8 kilograms (4 pounds) and a solar panel is installed on top of the blades to charge the battery.

NASA plans to conduct five flights of Ingenuity, including a high-altitude flight, on Mars. If it succeeds in high altitude, the flight time and elevation will be gradually extended. A successful flight of Ingenuity will be a breakthrough for space exploration, as the space helicopter will provide a new method of exploration in addition to the overland navigation of rovers.

NASA had installed a piece of the wing of Wright Brothers’ Flyer 1 — the first motored airplane in history in 1903 — under the solar panel of Ingenuity. Astronauts on Apollo 11, including Neil Armstrong, also carried a piece of Flyer 1 when they first landed on the Moon in 1969. Just as the Wright brothers made a flight possible while running a bike shop, their pioneering spirit is expanding beyond the Moon to Mars.