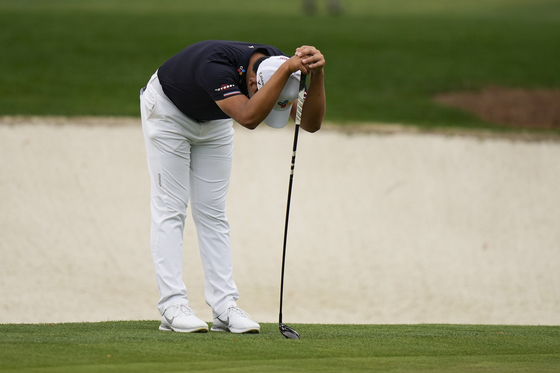 Kim Si-woo leans on the 3-wood that he had to use to putt after breaking his putter in a flash of rage during the second round of the Masters golf tournament on Friday in Augusta, Georgia. [AP/YONHAP]


Japanese golfer Hideki Matsuyama won the Masters on Sunday, becoming the first Asian to triumph at the tournament and the first major championship winner from Japan.

“I’m really happy,” Matsuyama said after his victory. “Hopefully I'll be a pioneer in this and many other Japanese will follow. I'm glad to be able to open the floodgates hopefully, and many more will follow me.”

But while Matsuyama made history, Korea's two major contenders failed to make an impact at Augusta National Golf Course.

Im Sung-jae, winner of the 2020 Honda Classic, failed to make the cut at the tournament, an increasingly rare set back for Asia's strongest male golfer.

Still, Kim did make headlines with his Masters performance, although not for all the right reasons.

While playing the second round on Friday, Kim lost his cool. Tied for fifth at the time, Kim saw his lead start to slip away over the 14th and 15th holes, smashing his putter into the ground on the 15th and bending his own club out of commission.


Remarkably, Kim was able to pull off two consecutive pars on the 15th and 16th holes using his 3-wood instead of his putter, actually narrowing the gap to just three shots behind halfway leader Justin Rose.


However, the Korean had to close out his fifth Masters with a final round of 72 to finish tied for 12th on two-under-par, 286.

Tied for 12th is the highest Kim has recorded since his PGA debut in 2017, which earned him a return trip to next year’s Masters.