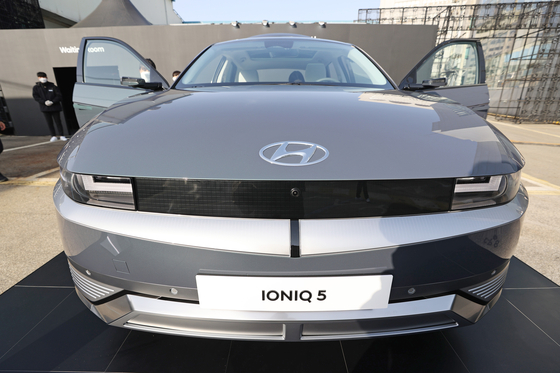 Hyundai Motor's Ioniq5 on display in Yongsan in March [YONHAP]


Subsidies for electric vehicle purchases risk breaking the bank, as demand has been much higher than forecast and local governments may not be able cover their obligations.

The Ioniq 5 from Hyundai Motor and Kia's EV6 have sold well in Korea.

Another supplementary budget is possible.

The ministry said while there's sufficient funds for EV subsidies covered by the central government, the local governments may fall short in meeting their obligations.

Among the 121,000 EVs that the government is targeting, nearly 62 percent are passenger EVs.

Some local governments may not be able to pay subsidies later in the year, as available funds are running low.

Applications for EV subsidies in Seoul and Busan are especially high.

There is growing concern that EV sales could exceed the government's target.

The Ioniq 5 is expected to be delivered to its owners around the end of this month, and the EV 6 in the second half.

A total of 21,016 EV6 orders were taken on the first day it was available, exceeding the automaker's annual sales target of 13,000.

The maximum subsidy covered by the central government is 8 million won, which is 200,000 won less than in 2020.

The subsidies covered by the local governments are different. In Seoul, the maximum amount is 4 million won. A buyer in Seoul could receive as much as 12 million won depending on the vehicle, which will be judged on its retail price as well as its performance.

The subsidies provided by the Gyeonggi government are between 4 and 6 million won, while in Busan they are 5 million won.

[WHY] Koreans just aren’t that into small EVs