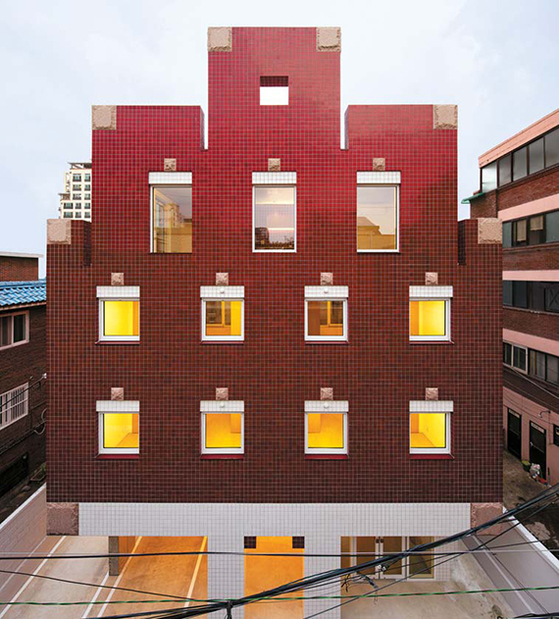 
Is it a strawberry popsicle, or a red cactus? This building near Mangwon market in Mapo District, western Seoul stops passersby in their tracks and makes them ponder what was the inspiration behind it.

Its symmetrical structure combined with red square tiles on the exterior is reminiscent of buildings in the video game Minecraft.

Unlike its unique appearance, this building named the Cascade House is a typical four-story multiplex house, known as a “villa” in Korea. Five families live in the building, and the first floor has a parking lot and a store, like most villas. 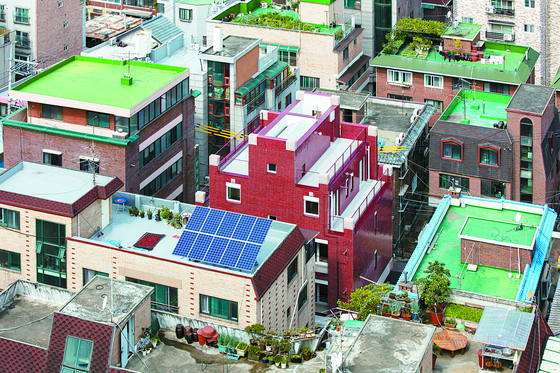 Cascade House from above. [JIN HYO-SOOK］


“It’s not the exterior that’s important,” said Suh Jae-won, the architect behind Cascade House and head of aoa architects.

“This building is completely symmetrical,” said Suh. “We had to build the due north part in a layered, terraced shape because of the “Architectural Slant Line Restriction for Daylight.” We used that regulation as a design element.” The restriction was legislated in the early 1970s to protect residents’ “right to light,” or access to sunlight.

“What we prioritized was the internal space. I think every house should have a decent-sized sink and dining space — but most Korean villas on the market have failed to consider this extremely basic thing.”

Each floor of Cascade House has two two-roomed apartments. Suh wasted no space and minimized any unusable areas.

But the layout of each apartment is what makes Cascade House unique. Normally, two-room apartments have an exclusive use area (the area within the house’s entrance for exclusive use by the owner) of 33 square meters (355 square feet), two rooms, and then a kitchen and bathroom awkwardly squeezed into the leftover space. Since offering “two rooms for rent” is the main goal, space for the kitchen is not prioritized. 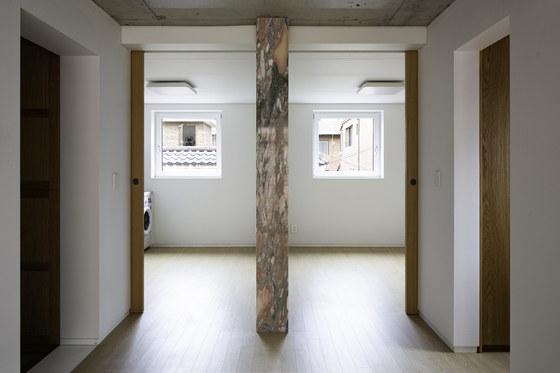 Inside a two-roomed apartment in Cascade House. The kitchen is on the left, and the bedroom on the right. [JIN HYO-SOOK］ 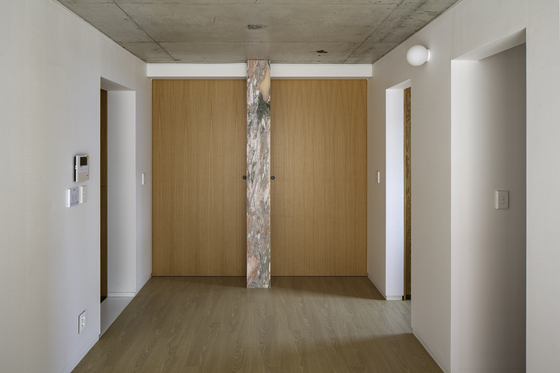 The two-roomed apartment with each door shut. [JIN HYO-SOOK］


Cascade House dedicates an entire room to the kitchen space. When you step into the house, you walk through the living room to reach the two rooms: A kitchen on the left and bedroom on the right.

Each room has a sliding door, which separates the spaces when necessary.

“If you have guests over and your kitchen is a mess, you can simply close the kitchen door,” says Suh.

The countertop in the kitchen is 2.1 meters (6.8 feet) long, and there is a 60 centimeter (24 inches) space between the sink and the stove top. On one side of the living room is a built-in closet and bathroom. The shower is enclosed, not always the case in Korean apartments where wet room bathrooms are common, so that water does not splash everywhere while occupants are washing. 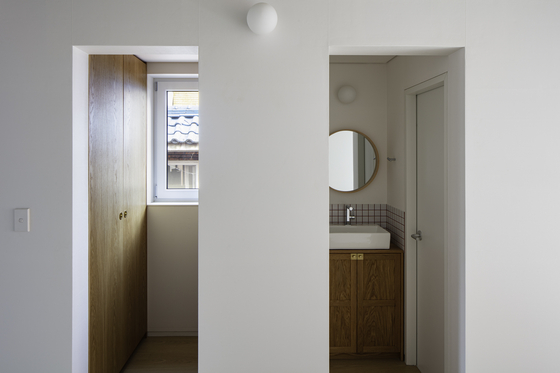 
Although the two-roomed apartment is 35 square meters, all the space available has been fully utilized and appliances thoughtfully installed to create what feel like relatively spacious homes.

“Many villas are built quickly in a cookie-cutter pattern because all the building owners care about is the space available to be rented out,” Suh said. “Then the villas end up being uncomfortable to live in, and people start wanting to move to apartment complexes. I wanted people to look back at Korea’s villa culture.”

Creating Cascade House was possible because its owner made the decision to not pursue profitability alone, prioritizing design and renters' comfort. The building also has a terrace where residents can sunbathe. The floor area ratio (the ratio of a building's total floor area to the size of the land upon which the building stands) is 175.35 percent, less than the land’s legal limit of 200 percent.

The monthly rent, however, is higher than other two-room apartments of similar size in the area. 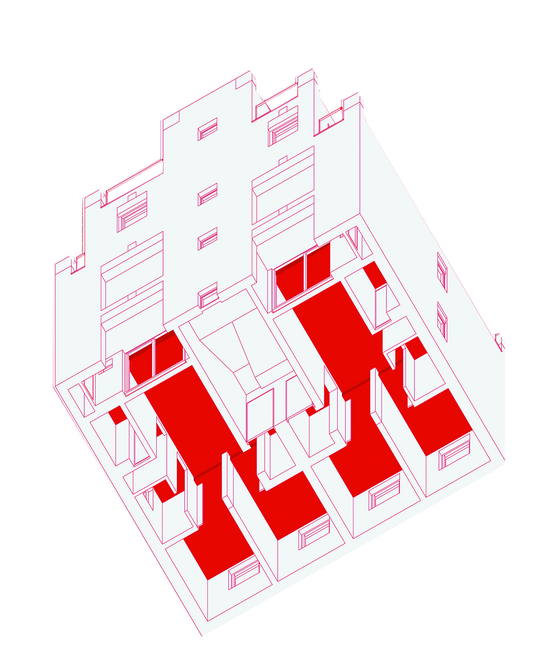 
But it will take more than good design to draw Koreans, who largely prefer apartment complexes, to villas.

According to Statistics Korea, 40 percent of Koreans live in multiplex houses, including single-family houses as of 2019. But in so-called “villa towns,” most residents end up moving to apartment complexes.

“People only talk about apartment complexes when they discuss housing policies, which means other forms of housing are left to deteriorate,” said Kim Hyun-seok, head of June Architects. Kim studied architecture in Korea and France, and has experience in urban planning in both Seoul and Paris.

“There needs to be a systematic way to improve residential conditions in multiplex houses.” 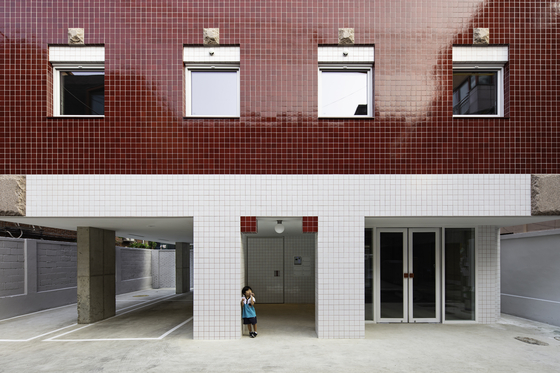 The parking lot of Cascade House. In typical Korean “villa towns,” parking lots on the ground level make the streets look empty during the day and dark at night. [HAN EUN-HWA]


In an area with many villas, the alleys tend to be especially dark. That’s because of the unlit parking lots on the ground level, built with supporting columns or “pilotis.”

The law, implemented in 2002, mandates multiplex houses to have parking lots of a certain size, depending on the exclusive use area of each household. Since the plots of land tend to be small, the government recommended the pilotis design, excluding the parking lot space from the total floor area and thus allowing one extra floor to be built.

Most villas have been built with parking lots on the ground level ever since, which means pedestrians can only see dim parking lots. 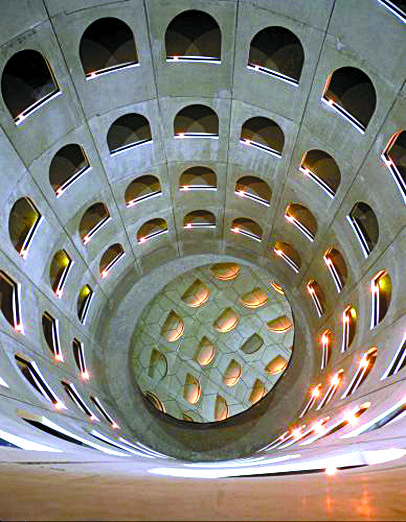 A parking lot under the Théâtre des Célestins in Lyon, France. [GUILLAUME PERRET]


In Paris, the city has stopped mandating parking lots for newly constructed housing complexes since 2015, as fewer Parisians own cars. The city previously required one parking spot per 100 square meters of housing, but now it has rediscovered hidden space under squares and parks to utilize as underground parking lots.

“More than 62 percent of Parisian households do not own cars as of 2013, and over half of them were single-person households. Paris also has plenty of communal parking spaces, so it wasn’t realistic to require a parking lot for every building,” said Kim. “We need to reevaluate if such regulation [in Korea] is necessary today." 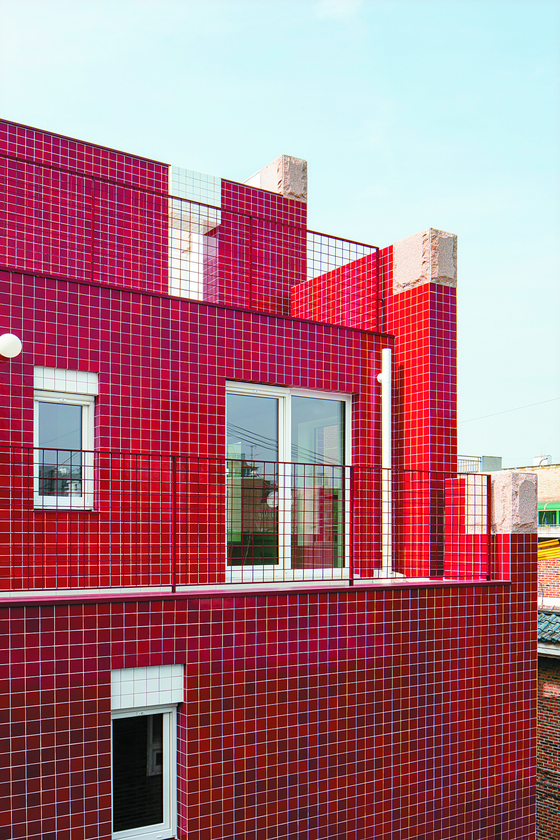 
But in certain plots of land, buildings can only go so high even if the floor area ratio limit is raised, due to the “Architectural Slant Line Restriction for Daylight.”

In residential areas, the due north part of a building needs to keep a certain distance from the boundary line with neighboring buildings: 1.5 meters for buildings lower than 9 meters, and over 50 percent of the building’s total height for ones higher than 9 meters. For instance, the third floor of a building can have an ordinary structure, but it must have a tapered shape from the fourth floor and above.

The legislation is intended to prevent buildings from blocking neighboring buildings' sunlight. However, the regulation often makes owners of small plots of land give up constructing anything at all, as the mandatory tapered shape makes the potential building too small. In this case, a raised floor area ratio limit means nothing.

“Korean villas tend to be low-rise because of this right to light regulation,” said Kim. “Even if there’s skilled architects, the construction and parking regulations restrict them from making good homes.”