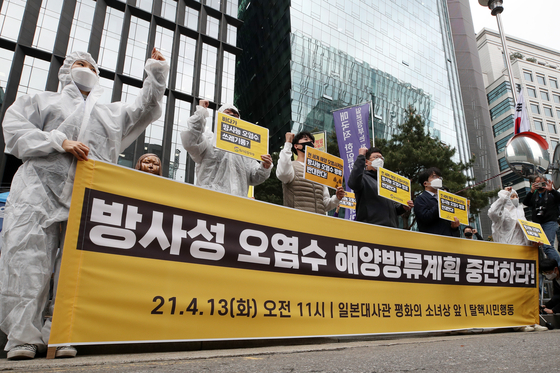 Environmental activists protest the Japanese government’s decision to release contaminated water into the Pacific Ocean from its Fukushima nuclear power plant near the Japanese Embassy in central Seoul Tuesday. [NEWS1]


Seoul expressed “strong regret” over Tokyo’s decision to release contaminated water into the Pacific Ocean from its Fukushima nuclear power plant, a move fiercely opposed by environmentalists and neighboring countries.

The Japanese government announced earlier Tuesday that it had decided in two years’ time to gradually release more than a million tons of treated wastewater from the Fukushima Daiichi nuclear plant into the ocean.

A massive earthquake and tsunami struck Japan on March 11, 2011, causing a meltdown at the Fukushima plant, operated by Tokyo Electric Power Company (Tepco) and killed nearly 16,000 people. For the past decade, Japan has struggled with what to do with radioactive water stored in large tanks at the defunct plant from before and after the accident. The tanks are expected to be full by the summer of 2022.

Plans to dump the water have been delayed in Japan amid protests both domestically, including by its local fishing industry, and internationally, from environmental organizations and governments of nearby countries such as Korea and China.

Japanese Prime Minister Yoshihide Suga said during a cabinet meeting early Tuesday that disposing of the wastewater from the plant was “unavoidable” for the decommissioning of the nuclear power plant.

Some 1.25 million tons of wastewater, enough to fill 500 Olympic-sized swimming pools, is stored in more than 1,000 tanks at the Fukushima plant. The actual release is expected in two years after approval by the Japan Nuclear Regulation Authority. As water continues to accumulate at a rate of about 170 tons a day, the release could go on for decades.

In a press conference held after the meeting at the Seoul government complex, Koo said, “The Korean government expresses strong regret over the Japanese government's decision to release contaminated water from the Fukushima nuclear power plant into the ocean, and plans to take all necessary measures keeping the safety of our people as the top priority.”

Seoul "strongly urged" Tokyo to ensure the transparent disclosure of information related to the treatment process of the contaminated water and demand specific measure by Japan to "ensure the safety of our people and prevent damage to the marine environment."

Korea plans to monitor more closely radiation levels in imported foods and where they come from, Koo said, because of consumer fears about the safety of Fukushima seafood and produce.

Seoul’s Foreign Ministry added in a statement that the Japanese government’s decision “not only poses a risk to the safety of neighboring countries and the maritime environment, but is a unilateral measure, without sufficient consultation and understanding from its nearest country, Korea.”

The Korean government formed an interagency task force in 2018 to monitor the Fukushima wastewater situation and has been saying for years that Tokyo has not been transparent about its wastewater plans.

Chinese Foreign Ministry spokesman Zhao Lijian said in a statement that Japan’s unilateral decision “is highly irresponsible and will severely affect human health and the immediate interests of people in neighboring countries.”

The U.S. State Department, on the other hand, expressed tacit support for Japan’s plan “to dispose of the treated water by discharging it into the sea.”

U.S. State Department spokesperson Ned Price said in a statement Monday, “Japan has weighed the options and effects, has been transparent about its decision, and appears to have adopted an approach in accordance with globally accepted nuclear safety standards.”

Price added that Washington looks forward to Japan’s “continued coordination and communication as it monitors the effectiveness of this approach.”

Environmental organization Greenpeace International “strongly condemned” Japan’s decision to dispose of the radioactive waste water, stressing that it “completely disregards the human rights and interests of the people in Fukushima, wider Japan and the Asia-Pacific region.”

Jennifer Morgan, the executive director of Greenpeace International, called the Japanese government’s decision to dump nuclear waste into the Pacific Ocean an “outrage” and a “violation of Japan’s legal obligations under the United Nations Convention on the Law of the Sea.”

She noted that a recent Greenpeace Japan report spelled out “alternatives to the current flawed decommissioning plans for Fukushima Daiichi” and noted that are other options to stop the continued build-up of contaminated water.

Kazue Suzuki, a campaigner at Greenpeace Japan, said in a statement, “Rather than using the best available technology to minimize radiation hazards by storing and processing the water over the long term, they have opted for the cheapest option, dumping the water into the Pacific Ocean.

Greenpeace has previously warned that contaminated water from the wrecked Fukushima plant contains a long-term radiological hazard that can damage human DNA and remain in the environment for generations to come.

While Japan claims the water has been treated by Tepco’s advanced liquid processing system, which is supposed to remove highly radioactive substances, a report released in October by Greenpeace Germany stated that the water contains strontium-90, carbon-14 and other hazardous radionuclides.

As tritium, carbon-14 and other radioactive isotopes cannot be filtered out, the Greenpeace report said that the water “can only be described as contaminated.”

Tepco acknowledged last August the presence of high levels of radioactive carbon-14 in the contaminated tank water at the plant.

Carbon-14 has a half-life of 5,370 years, the report noted, and if the contaminated water is discharged into the Pacific Ocean, it will be “delivered to local, regional and global populations for many generations.”

In Korea, an alliance of 31 environmental groups including the Korea Federation for Environmental Movements released a joint statement Tuesday demanding the Japanese government retract its decision to dump the water, comparing it to an “act of nuclear terrorism” that will damage the marine ecosystem beyond repair. 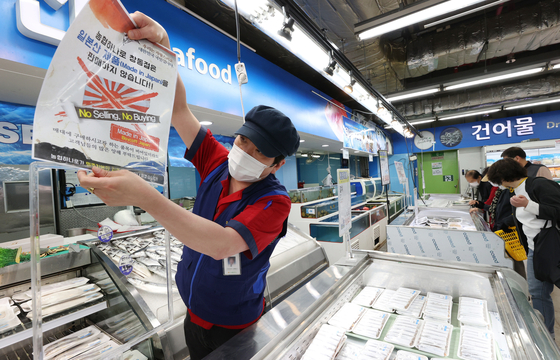 A fishmonger at a supermarket in Dobong District, northern Seoul, hangs up a sign Tuesday that states “Japanese seafood exports are not sold” after Tokyo decided to release radioactive water into the sea from its Fukushima nuclear power plant, a move also protested by Japan’s fishermen. [YONHAP]