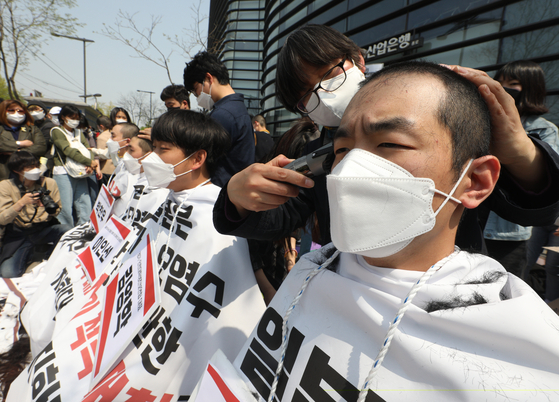 Members of an association of university students shave their heads in protest of Japan’s decision to release contaminated water into the Pacific Ocean in front of the Japanese Embassy in central Seoul Tuesday. [NEWS1]


Seoul’s Ministry of Foreign Affairs said Tuesday that it will push for Korean experts to partake in the UN nuclear watchdog’s team monitoring Japan's planned discharge of contaminated water into the Pacific Ocean from its crippled Fukushima nuclear power plant.

In a report to the National Assembly’s foreign affairs committee, the Foreign Ministry said that it will also actively publicize the issue through multilateral diplomacy channels including the International Atomic Energy Agency (IAEA), the United Nations and the World Health Organization (WHO).

The ministry said that it will request to Japan for Korean experts to be dispatched to the IAEA expert team to objectively verify the safety of Tokyo's decision to release the contaminated water from Fukushima. It will also urge participation of Korean researchers in joint IAEA-Japan studies.

The ministry noted that Korea, as Japan’s closest neighbor, will likely be the most directly impacted by the discharge and said it will request that Tokyo share additional information and hold consultations separate from the IAEA verification process.

Seoul will also review judicial procedures which could include a referral to the International Tribunal for the Law of the Sea.

Japanese Ambassador Koichi Aiboshi said Monday that he thinks Korean experts can be part of an IAEA-led monitoring team for Tokyo’s planned release of the contaminated water.

“We would think so, but it will be a matter to be consulted on between the IAEA and the Korean government,” replied Aiboshi when asked by a reporter about Korea’s possible participation in such a monitoring team at a photo exhibition in Seoul marking the 10th anniversary of the Trilateral Cooperation Secretariat between South Korea, China and Japan.

Tokyo announced last week its controversial decision to gradually release wastewater stored at the Fukushima Daiichi nuclear plant into the Pacific Ocean in two years, a move which has been protested by the Japanese fishing industry, international environmental groups and neighboring countries. A massive earthquake and tsunami struck Japan on March 11, 2011, causing a meltdown at the Fukushima plant, and so far some 1.25 million tons of contaminated water are stored in over 1,000 tanks there, expected to be completely full in the latter half of next year.

Korean Foreign Minister Chung Eui-yong said in a parliamentary hearing Monday that if Japan “follows the appropriate procedure that meets the standards of the IAEA, there is no objection.” His words appeared to contradict the Korean government’s position that it opposes the discharge of the contaminated water from the nuclear plant because of deep concerns over the potential threats it might pose to people’s health and the environment.

He said his comment was made simply in rebuttal of accusations that the government was just “complaining for the sake of complaining” or protesting simply because the matter involves Japan.

Chung continued, “So far, the only country that seems to have shown a positive reaction is the United States.” He added that Seoul has requested Washington to clarify on the areas where opinions on the wastewater release issue differ.

The U.S. State Department last week expressed tacit support for Japan’s plan “to dispose of the treated water,” claiming that Tokyo has been “transparent about its decision,” appearing to take an approach in “accordance with globally accepted nuclear safety standards,” contradictory to the viewpoints of neighboring Seoul and Beijing and environmental groups like Greenpeace.

Chung asked for a clarification from Washington during talks with U.S. Special Presidential Envoy for Climate John Kerry Saturday in Seoul.

A group of 160 fishing boats staged a protest off the coast of Yeosu, South Jeolla, on Monday, organized by 13 local fishing groups and joined in by protesters on land who called on Tokyo to halt its release plans, citing worries about the safety of the people, and demanding a ban on the import of Japanese seafood.

A group of Korean nuclear experts and researchers Tuesday likewise called on Tokyo to withdraw its decision to release contaminated water from Fukushima and urged the Japanese government to provide additional information.

The Ministry of Science and ICT held a meeting of nuclear scientists at the Korea Atomic Energy Research Institute in Daejeon to discuss the wastewater discharge issue.

Song Jin-ho, a researcher with the institute, pointed out that there was a period when Japan's advanced liquid processing system (ALPS) to treat the wastewater didn’t function properly at the Fukushima plant and that radionuclides at the tanks containing the contaminated water was at one point five to 100 times higher than the legally permitted amount. 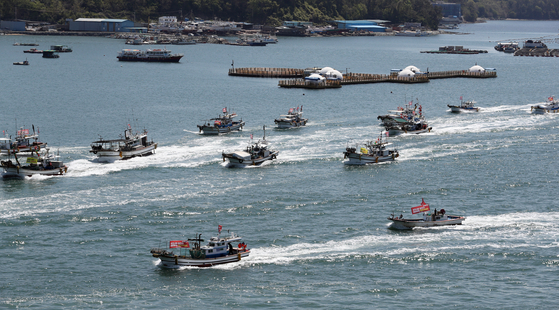 Some 160 fishing boats off the coast of Yeosu, South Jeolla, sail Monday in protest of Japan’s decision to dump contaminated water into the Pacific Ocean. [YONHAP]

What did the government do?