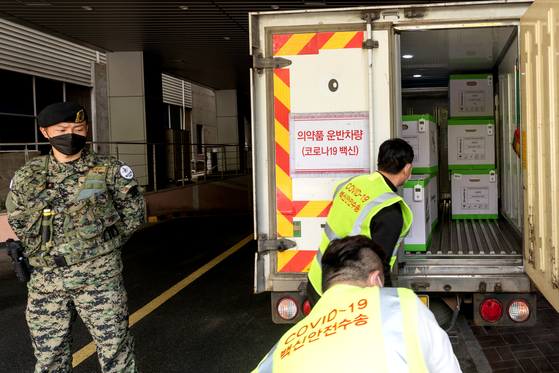 
Concerns are growing over Korea's Covid-19 vaccine supplies, along with doubts that the country can achieve herd immunity by November.

On Monday, the government announced it has arranged vaccines from Novavax, which is produced by SK Bioscience. But they will only come in the third quarter of the year -- they were expected in the second -- and will only be 20 million doses, half as much as expected.

Through the end of June, therefore, Korea has to rely on vaccines from two companies: AstraZeneca and Pfizer.

Health authorities resumed AstraZeneca vaccinations Monday after temporarily suspending the jabs due to a possible link with blood clots. They are excluding people under 30 from receiving AstraZeneca jabs because the risk of blood clots for those in that age bracket is greater than being hospitalized or dying from Covid-19.

Around 640,000 people below 30 were earlier planned to receive AstraZeneca's jabs in the second quarter.

Also, anxiety over blood clots is likely to make some older people reluctant to get the AstraZeneca vaccines.

Pfizer vaccines are also having some problems in Korea.

Vaccinations for senior citizens aged 75 or older began nationwide on April 1, but many are waiting for the inoculation dates.

A 76-year-old man surnamed Nam, who lives in Bundang District in Seongnam, Gyeonggi, has not received any updates so far since he volunteered to get the Pfizer vaccine on March 25.

After waiting for more than two weeks, Nam's son called the community center and was told his father will be inoculated sometime between May and June.

"We haven't been notified of the future schedule from the Korea Disease Control and Prevention Agency (KDCA) yet," said an official from the center.

Korea's Covid-19 vaccination Task Force says the delay for Pfizer vaccines is related to the opening of regional vaccination centers.

Pfizer shots have to be preserved at vaccination centers equipped with ultra-cold chain storage — at minus 75 degrees Celsius (minus 103 degrees Fahrenheit).

However, as of Tuesday, there are only 71 such centers nationwide. According to the Task Force, a total of 175 centers will be open by Thursday, and 276 centers by the end of April, with at least one in every city and county.

"We cannot operate a vaccination center immediately just by finding a space," said an official from the task force. "We have to go through mock training for medical personnel, and the stabilization process for ultra-low temperature freezers usually takes two to three days. After checking all of these, we allocate the amount of vaccines, so there can be people waiting on the list depending on the region." 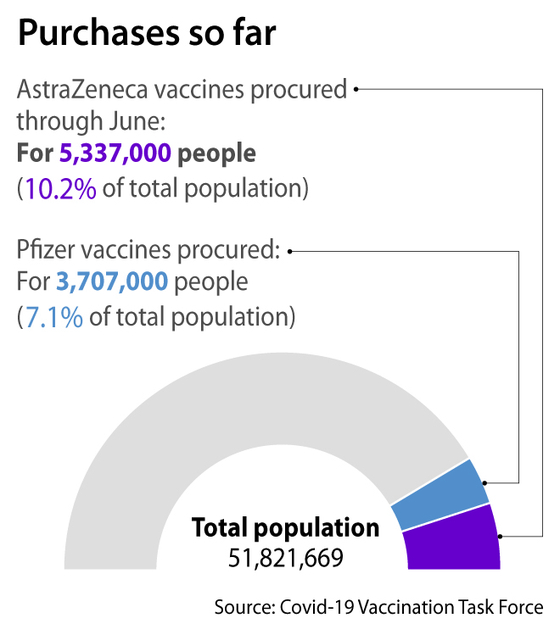 As a result, it has been nearly two weeks since the start of vaccinations for the elderly, but the inoculation rate remains at only 4.8 percent of Korea's 3.5 million elderly people as of Monday midnight.

The various glitches may prevent the government from reaching its goal of getting first shots in 12 million people, or 23 percent of the population by the end of June, and achieving collective immunity by November. Currently, only 1.19 million people have been vaccinated.

Janssen, which was scheduled to be delivered in the second quarter, became the third vaccine approved in Korea on April 7, following AstraZeneca and Pfizer.

Moderna applied for permission to Korea's Ministry of Food and Drug Safety on Monday, and the approval will soon be decided through a triple advisory process.

However, both the amounts and the delivery dates for the two vaccines have not been confirmed yet.

"We are currently conducting conferences with representatives of the vaccine companies," said Kwon Deok-cheol, Minister of Health and Welfare. "We will discuss how to procure the vaccines earlier, leaving the possibility of additional purchases open."

"Korea needs more vaccines, but Janssen has suffered a setback in production, and it is likely to suffer from blood clot issues even when it's delivered," said Jung Ki-suk, a professor of pulmonary care at Hallym University's Sungsim Hospital.

"Based on the government's goal, about 80 percent of the 44 million population, which excludes people under 16, should be inoculated by November, but at this rate, it seems difficult," he said. 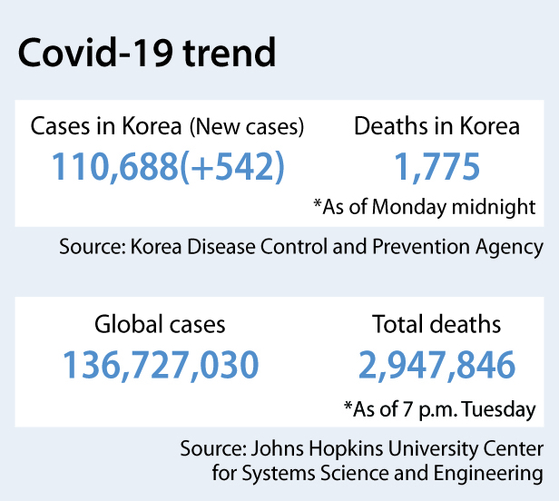 The country added five more deaths, raising the total to 1,775.