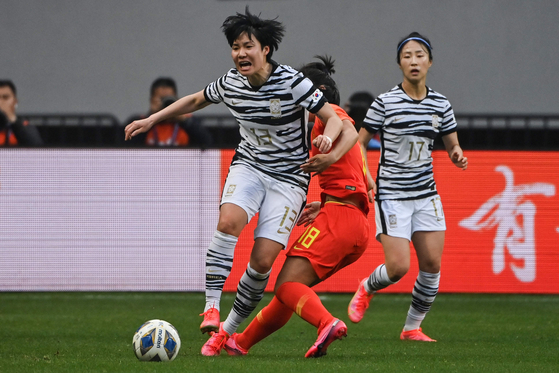 
Korea drew 2-2 with China after a hard-fought Olympic qualifier in Suzhou, China on Tuesday. The draw gave China a 4-3 win on aggregate, earning them a spot at the Tokyo Games and sending the Taeguk Ladies home empty-handed.

Korea entered the game down 2-1 on aggregate after losing to China at home last week. Despite a stunning goal from Kang Chae-rim in the 39th minute, a second-half penalty gave China the win at Goyang Stadium in Goyang, Gyeonggi.

As a result, Korea had to pick up a win — ideally by more than one goal to avoid extra time — in Suzhou on Tuesday.

Fielding a slightly stronger side that included both Chelsea midfielder Ji So-yun, who wore the captain's armband, and Tottenham Hotspur midfielder and Korea's most-capped player Cho So-hyun, Korea dominated play from the opening minute, offering China few shots on goal as an increasingly confident Korean side got closer and closer to the Chinese goal.

It was in the 31st minute that Korea first struck. Once again it was Kang who picked up a cross from Cho inside the box and found a gap between two defenders and the goalkeeper to take the score to 1-0, or 2-2 on aggregate.

Korea was back in front of the goal a few minutes later.

Ji sent a corner flying into the box which Cho headed toward the goal, only to be blocked by Chinese goalie Shimeng Peng. The deflection was picked up and hammered back into the box where Choe Yu-ri was able to fire it into the back of the net.

With the two goals, Korea led 3-2 on aggregate at the end of the first. If they could hold on for another 45 minutes, Korea would be going to the Tokyo Olympics.

Both teams got increasingly aggressive in the second half of the game, as an increasingly desperate China tried to breakthrough the Korean defense. China finally got on the scoreboard in the 69th minute with their first goal of the game, taking the score to 2-1 for the match and 3-3 on aggregate.

Neither side was able to break the tie before the whistle blew at 90 minutes and the qualifier moved into extra time.

Korea's Olympic dreams took a blow in the 14th minute of overtime when China's Wang Shuang scored her second goal of the match to tie the score at 2-2 and give China the lead on aggregate.

The final 15 minutes saw an increasingly frustrated Korea struggling to get any shots on goal as the Chinese players took every opportunity to interrupt play and use up the dying minutes of the game.

Korea wasn't able to find a way through and the game ended at 2-2, with China winning 4-3 on aggregate to earn the Olympic berth. Korea return to Seoul without a ticket to Tokyo.

Korea has never qualified for the Olympic games before, falling out during qualifications each year. Both Cho and Ji have been with the national team since their bid for the 2008 Beijing Olympics, missing out on spots at London 2012 and Rio 2016 as well.

The Asian Football Confederation (AFC) qualifiers for the 2020 Tokyo Olympics began in 2018 with a total of 25 teams entering the draw. After three rounds of qualifiers, only Australia, Vietnam, China and Korea are left competing for the two Olympic berths available to AFC countries.

Australia and Vietnam played their playoff last year, with Australia winning to earn a spot at the Games. The Korea-China game was delayed due to Covid-19.