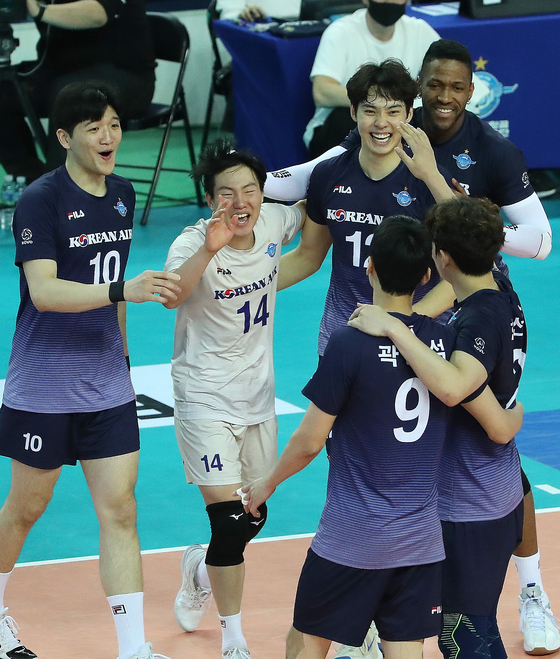 The Incheon Korean Air Jumbos, including libero Oh Eun-ryul, second from left, cheer during the second game of the V league championship series at Gyeyang Arena in Incheon on Monday. [NEWS1]


The men's V League championship series is tied at a game a piece with neither the Seoul Woori Card Wibees or Incheon Korean Air Jumbos able to find an edge in the best-of-five series.

But just when it looked like the Wibees would dominate the series, the Jumbos came back with a vengeance on Monday taking five sets to take down the Wibees 3-2.

Monday's was a lengthy game that took a total of two hours and 28 minutes, almost an hour more than the game on Sunday.

The Wibees took the second set of the game 29-27 after a hard-fought 42 minutes. It takes 25 points to win the first four sets of the game, but a set can only be won when one team is at least two points ahead.

The already fierce competition heightened as both teams' liberos put on a show with some incredible digs to keep the ball in play.

Liberos, as defensive players, are responsible for receiving an attack or serve. Liberos go for a dig when they drop to the floor, preventing the ball from touching the court at the very last second.


The best-of-five series will continue with the third match at Jangchung Gymnasium in central Seoul, on Wednesday.