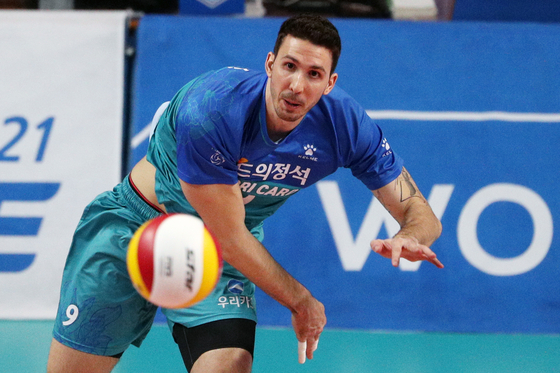 Alexandre Ferreira of the Seoul Woori Card Wibees serves the ball during the second game of the playoff series against OK Savings Bank Rush & Cash at Jangchung Gymnasium in central Seoul on Wednesday. [NEWS1]


The Seoul Woori Card Wibees beat the Ansan OK Savings Bank Rush & Cash 3-1 at Jangchung Arena in central Seoul on Wednesday, sweeping the second round of the playoff series 2-0 to earn a spot in the championship.

This game was all about powerful serves, with Kim Ung-bi of OK Savings starting things off with five straight points from serves in the first set.


The Wibees responded in kind, with Alexandre Ferreira also pulling off two consecutive aces. Ferreira proved unstoppable throughout the game, playing defense, blocking and serving 24 points in total, the most out of both teams.

Raising three or more points in all three positions — blocking, serving and defense — is known as a triple crown. Ferreira hit his fifth triple crown during the game.


Having won both games 3-1 against the OK Savings, the Wibees win the series and advance to the championship against the Incheon Korean Air Jumbos.

The Wibees advance to the championship series for the first time since they joined the V League for the 2013-14 season.

The Wibees have been on track to reach the final for years. In the 2018-19 season, the Wibees made it to the playoffs but lost to the Cheonan Hyundai Capital Skywalkers. Last year, the Wibees were at the top of the regular season table and looked set to earn a ticket straight to the championship, before the season was abruptly called off due to the coronavirus pandemic.

The winner of the best of five takes the championship title — if its Korean Air, they will have won the double with the regular season title.

The first match of the championship series will take place at Gyeyang Arena in Incheon, at 7 p.m. on Sunday.