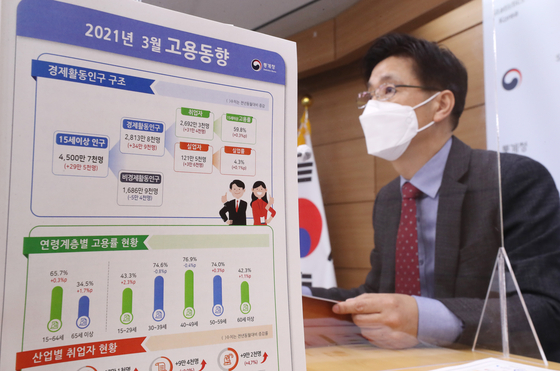 Chung Dong-myung, head of social statistics at Statistics Korea, holds a briefing on the March job report at the government complex in Sejong on Wednesday. [YONHAP]


Gross employment increased for the first time in more than a year in March, another sign that economic recovery is on the way.

In March, the total number of people working in the country was 26.9 million, up 314,000 on year, according to Statistics Korea. It is the first on-year rise in 13 months.

The base effect helped boost the number, as employment dropped dramatically last year at the outset of the pandemic.

The positive figure breaks the second longest streak of on-year declines in total employment. Between January 1998 and April 1999, the figure fell for 16 consecutive months.

The improvement in the job figures continued to heavily depend on government-led programs with manufacturing and services lagging as the pandemic wears on. Restaurants and hotels have been especially hard hit.

In health and social welfare, 171,000 more people were employed on year, a 7.6 percent jump. Public administrative, national defense and social security jobs, which are government jobs, increased by 94,000, or 9 percent.

Manufacturing employment dropped by 11,000, or 0.3 percent. A total of 4.4 million people are employed in manufacturing, 16.4 percent of all employment.

In February, 270,000 manufacturing jobs were lost.

Finance Minister Hong Nam-ki celebrated the rise but remains cautious as Covid-19 infections remain stubbornly high. On Wednesday, 731 more people were infected, the most daily cases since 869 on Jan.7.

"We're at an important point that will determine if we're heading towards a fourth wave," Hong said. "The biggest risk to the job market is the quarantine situation, and therefore we should take it seriously."

He said the government will execute job measures and create 260,000 jobs, as detailed in this year's supplementary budget.

"We will work on improving jobs and on the economic rebound through more active communication with companies."