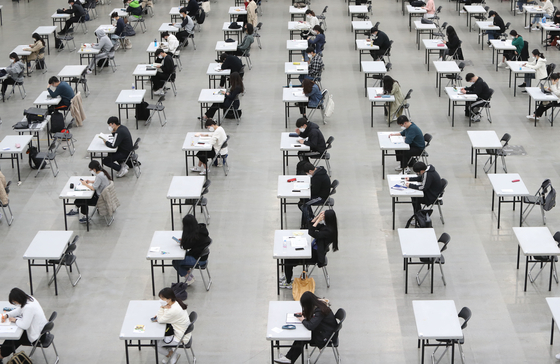 Those applying for jobs at the Daegu Metropolitan Transit Corporation taking an exam at a convention center in Daegu while social dsitancing on May 2. Number of jobs in April saw the biggest increase in six years. [YONHAP]

Total employment grew the most in six years in April as gains were reported throughout the economy, even in hard-hit business categories.

The number of people working in Korea was up 652,000 last month on year, according to Statistics Korea. It was the second consecutive month of on-year gains and took the total number of people employed to 27.2 million.

The unemployment rate fell to 3.7 percent from 3.9 percent and is down from January’s 5.4 percent, which was a 21-year high.

The strong April is an indication that the recovery is strong and broad based, the government believes.

It was the first time manufacturing, restaurant and lodging employment all rose since the beginning of the pandemic.

Job numbers sharply dropped since March last year as the pandemic got rolling. That trend continued until February this year before turning around in March, when employment increased 314,000.

The government credited strong export growth as driving the employment recovery. With stronger exports, manufacturers are hiring and this is leading to higher consumer spending.

The base effect played a role in the jump, and total employment is still below levels in late 2020, but the good reading is still seen as a positive sign.

On Wednesday, Finance Minister Hong Nam-ki said the recovery in the job market is building, emphasizing the strong private-sector recovery.

“In April, jobs in the private sector contributed to the overall employment,” Hong said. “It contributed more than half of the jobs in April.”

He added that hiring in the private sector accounted for 50 percent of the 728,000 jobs created in the first three months of the year.

Jobs in health and social welfare, which are heavily funded by the government, continued to be a major driver. Last month, 224,000 more were employed in this category compared to the year-earlier period, which is a 9.9 percent increase.

In total, 9.2 percent of all jobs are health and social welfare related.

Manufacturing, which employs 16.1 percent of all of those with jobs, added 9,000 positions compared to the year-earlier period, a 0.2 percent year-on-year increase and a turnaround from March, when 11,000 jobs were lost.

Last month, 61,000 more people were employed at hotels and restaurants, a 3 percent increase. This is the first increase in the category since March 2020.

In the logistics and warehouse category, 107,000 more people were employed, a 7.3 percent increase.

In wholesale and retail, employment fell 182,000, down 5.2 percent. These businesses employ 12.3 percent of those with jobs.

Employment numbers for those in their 60s continued to improve, with 469,000 jobs added in this age group,

The Finance Minister blamed the falling number of people in their 30s and 40s for the decline.

The Finance Minister said despite the improvements in the job market, the government will remain vigilant.

“We will further strengthen our policies so that the recent economic recoveries, including those exports and investment, will speed up the improvement of the job market,” Hong said.