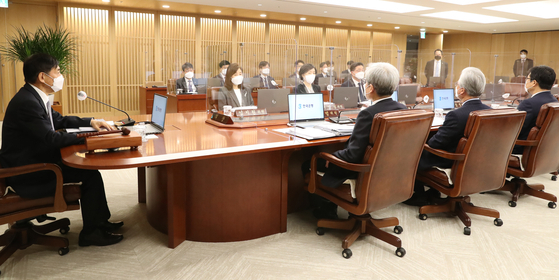 Bank of Korea Gov. Lee Ju-yeol, far left, conducts monetary policy board meeting at the central bank in Jung District, central Seoul, in January. During the meeting, the board decided to freeze base interest rate at 0.5 percent. On Thursday, the board decided to maintain the rate once again. [BANK OF KOREA]

The rate has been kept at that record low level since last May.

Last year, the monetary policy board of the Bank of Korea (BOK) lowered the base rate twice -- in March to 0.75 percent and in May to 0.5 percent -- as the coronavirus pandemic started pulling down the economy.

In a written statement to reporters last month, BOK Gov. Lee Ju-yeol said that while there were inflationary forces evident in the market, as oil prices pick up and exports recover, it was too early to raise interest rates.