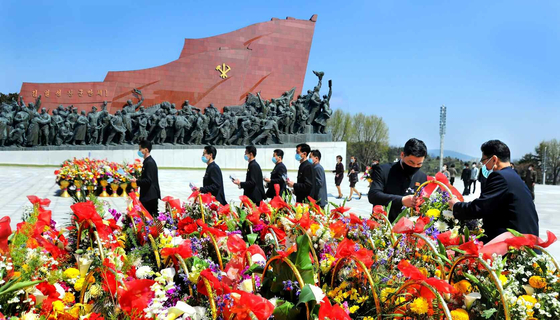 North Koreans visit Mansu Hill in Pyongyang Thursday to lay floral baskets and bouquets to mark the 109th birthday anniversary of late founder Kim Il Sung, or the Day of the Sun, the country’s largest national holiday, in a photograph released by the state-run Rodong Sinmun. [YONHAP]


North Korea marked founder Kim Il Sung’s birthday anniversary Thursday with more festivities than the previous year, and with no signs of unusual activities so far, according to the South Korean military.

Col. Kim Jun-rak, a South Korean Joint Chiefs of Staff (JSC) spokesman, said Thursday, “There was no special movement in North Korea to elaborate on so far,” addressing concerns that Pyongyang may escalate military tensions around the 109th birthday of the country's founder and grandfather of the current leader, Kim Il Sung.

“Our military is closely monitoring the movement of the North Korean military under close coordination with U.S. intelligence authorities and maintaining a firm readiness posture,” Kim added.

North Korea announced it had planned numerous cultural and sports events, unlike last year when such events were canceled because of the Covid-19 pandemic.

The newspaper published articles praising Kim Il Sung as the “eternal leader,” detailing the celebratory mood in the country, but one article noted that Pyongyang was “intensifying emergency anti-epidemic work to cope with the world health crisis,” mindful of virus containment efforts amid the ongoing Covid-19 pandemic.

While North Korea claims to be virus-free, photographs showed that people wearing colorful hanbok (traditional Korean dress) on the streets of Pyongyang to celebrate the national holiday were all masked. An annual international marathon, open to foreigners, was again canceled this year.

The streets of Pyongyang were covered in large posters celebrating the birthday anniversary of the late founder. Sports events kicked off last week, while a photo exhibition opened Tuesday alongside various celebratory performances.

The Rodong Sinmun reported Thursday that the whole country has been in a “festive mood” over the past week, with performances by art groups and musical troupes at the Pyongyang Railway Station and factories in Pyongyang and in provinces outside of the capital.

Monday marked the ninth anniversary of Kim Jong-un assuming power. Kim was named "first secretary" of the ruling Workers' Party on April 11, 2012, after his father and former leader Kim Jong-il died in December 2011. He was named general secretary earlier this year.

The KCNA reported that Xi “expressed his deep thanks for this and asked the ambassador to convey his warm greetings” to leader Kim.

Ri, a former trade minister, was named as North Korean ambassador to China in February to replace Ji Jae-ryong, who had served as top diplomat since 2010, in an appointment which could also indicate Pyongyang’s intentions to strengthen economic cooperation with Beijing.

Analysts point out that Pyongyang will be mindful of the reaction from Washington should it opt for military provocations, as the U.S. nears its review on North Korea policy.

The Tom Lantos Human Rights Commission, a U.S. bipartisan congressional caucus, was also set to hold a hearing on freedom of expression on the Korean Peninsula later Thursday, with a focus on the controversial anti-leaflet law passed by South Korea’s parliament last December banning the flying of anti-Pyongyang leaflets over the inter-Korean border.

Civic and religious groups in South Korea protested the House caucus hearing, arguing the law protects people living near the inter-Korean border and promotes peace and security on the peninsula.

A group of pastors of the Representative of Peace Prayer Pastors Meeting and Uijeongbu Diocese Committee for the Reconciliation of the Korean People sent a letter to the co-chairs of the Lantos commission Thursday that stressed the new law is needed for “the peace of the border village residents."

They wrote that the anti-leaflet act “is a law made by the National Assembly, the representative body of the Korean people, with the opinions of many Korean citizens,” and that the sending of leaflets across the border had “caused conflicts with residents in the border."