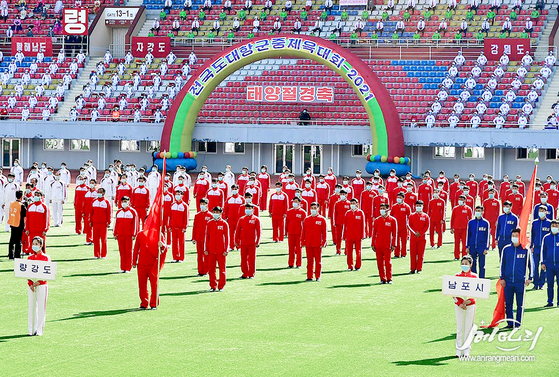 North Korea holds a sports event with participants all masked on April 6, a week ahead of the Day of the Sun, or founder Kim Il Sung’s birthday anniversary, which falls on Thursday. [YONHAP]


In what could be a pivotal week on the Korean Peninsula, there is interest whether North Korea's leader Kim Jong-un would opt for any provocation as the country marks the birthday of Kim Il Sung Thursday and Washington finalizes its Pyongyang policy review.

The U.S. Congress is also set to hold a rare hearing Thursday on Seoul's controversial law banning sending anti-Pyongyang leaflets across the border, a move seen by observers as the United States pressuring both Koreas on human rights, an issue prioritized by the Joe Biden administration.

The Day of the Sun, which takes place on April 15 each year, is North Korea's biggest national holiday, and this year marks the 109th birthday of the country's founder Kim Il Sung, the grandfather of the current leader.

Pyongyang has also often marked the occasion with flashy military parades, such as one in 2017 showcasing its new intercontinental ballistic missiles (ICBMs) to mark the 105th birthday of Kim Il Sung.

It has also been an occasion to test weapons, such as a new Musudan intermediate-range ballistic missile on April 15, 2016, and a KN-11 submarine launch ballistic missile (SLBM) a week later. Years earlier on April 14, 2009, Pyongyang announced its withdrawal from the six-party talks.

Kim Jong-un usually visits the Kumsusan Palace of the Sun every year on this day, though he missed an appearance last year.

Seoul has urged the Biden administration to speed along its comprehensive review on North Korea policy, holding the logic that if it took too long, there would be a higher possibility of North Korean provocations which could increase tensions on the Korean Peninsula.

The review status was shared at the trilateral meeting of the national security advisers of South Korea, the United States and Japan at the beginning of this month, and the Blue House expects the review will be completely finished within this month.

One source said, "The content is pretty much finalized, so the outline may be revealed as early as this week."

Thus, North Korea's calculation method is bound to be complicated by the timing and content of the review.

Jung Dae-jin, a professor of Ajou University's Unification Research Center, said, "North Korea will try to do something on the Day of the Sun, but since it lands during the U.S. policy review period, rather than a high-intensity strategic provocation, there is a possibility that it could direct more intense tactical provocation toward South Korea."

He added that there is a possibility that Pyongyang could "engage in new types of threats near the military demarcation line [MDL]" at the inter-Korean border, or engage in some form of "nonmilitary actions" such as scrapping the Committee for the Peaceful Reunification of the Country, the North's Workers' Party agency in charge of inter-Korean dialogue, as threatened last month by Kim Jong-un's younger sister Kim Yo-jong.

The Tom Lantos Human Rights Commission, a U.S. bipartisan congressional caucus, said it will be holding a hearing on South Korea's ban on flying anti-Pyongyang leaflets into North Korea, seen as a violation of freedom of expression by defector groups and rights organizations.

It is unusual for the U.S. Congress to hold a hearing on human rights issues of an ally, but the occasion comes as the Biden administration has been pushing to hold countries, including North Korea, accountable for human rights violations.

The commission contrasts North Korea, an authoritarian state, with South Korea, a constitutional democracy, in what could be a message on the Biden administration's push for human rights issues.

The hearing, according to the commission in a press release, will "examine the role of the right to freedom of expression and the exercise of other rights in the broader context of inter-Korean, U.S.-ROK relations, and U.S.-DPRK relations, including strategies for advancing human rights in North Korea." DPRK stands for the North's official name, the Democratic People's Republic of Korea. ROK is the acronym for the South's official name, the Republic of Korea.

The U.S. government-funded nongovernmental organization Freedom House ranks South Korea as a "free" country with the same score as the United States — 83 out of 100 points.

However, the commission described, "Some observers have expressed concerns that the law could interfere with efforts to promote human rights in North Korea, including programs funded by the U.S. government, such as by disseminating USB drives containing information about the outside world."

It noted that "for decades credible nonpartisan observers have raised concerns about some measures taken by governments of all political stripes in Seoul that appear to restrict certain civil and political rights, including freedom of expression in South Korea."

The amendment to the Development of Inter-Korean Relations Act, passed by the South Korean National Assembly last December, went into effect last month. The revision stipulates a prison sentence of up to three years, or a fine of up to 30 million won ($26,600), for distributing items like leaflets, printouts, money or electronic storage devices to North Korea through the inter-Korean border.

Seoul has argued that the anti-leaflet act aims to defend the lives and safety of people living near the inter-Korean border, while defectors and human rights activists have said the new law could hinder freedom of expression and efforts toward the dissemination of information into the North.

A bipartisan group of 11 U.S. representatives led by the co-chairs of the Tom Lantos commission last month sent a letter to the Biden administration urging the appointment of a special envoy on North Korean human rights issues.

Pyongyang has responded sensitively to criticism of its human rights situation and also vehemently criticized defector groups sending propaganda material across the border last year. But North Korea has not released any statement since the passing of the South's anti-leaflet law. The U.S. congressional hearing on the issue and its implications on North Korea's rights situation is due to cast a shadow on its celebrations Thursday.

Pyongyang on Monday marked the ninth anniversary of Kim Jong-un assuming power. Kim was named "first secretary" of the ruling Workers' Party on April 11, 2012, after his father and former leader Kim Jong-il died in December 2011. He was named general secretary earlier this year.

North Korea appeared to be keen on strengthening internal solidarity and enhancing economic durability, a consistent message in its major political meetings and state media.

However, North Korea recently has been showing movement within its SLBM program, consistent with Kim's message at the ruling Workers' Party congress at the beginning of the year saying he will continue to advance his country's nuclear power.

According to Pyongyang analysis website 38 North, commercial satellite imagery Saturday indicated that a missile canister for the submersible missile test barge has likely been removed, possibly for the replacement of a new canister or launch frame to accommodate larger SLBMs.

Analysts at 38 North speculated that the move in recent weeks possibly indicates preparations to roll out a new ballistic missile submarine, modifications to a test barge for larger SLBMs, early preparation for an SLBM test or general maintenance.

South Korea is closely monitoring the North's military movement in close coordination with U.S. intelligence authorities, a Joint Chiefs of Staff (JCS) spokesman said Monday, responding to the signs of activity at the North's Sinpo Shipyard, stressing the military is maintaining a "readiness posture."

Asked about any signs that North Korea is ready to launch a new 3,000-ton submarine, the spokesman only said the authorities are watching related moves closely, leaving all possibilities open.

North Korea reportedly completed the construction of a new 3,000-ton submarine expected to be capable of carrying three SLBMs, first unveiled in July 2019.

"It is true that there is a possibility of provocation because of the hearings and the Day of the Sun," said Shin Bum-Cheol, director of the Diplomacy Security Center at the Research Institute for Economy and Society. "However, Pyongyang can always completely control the intensity and timing of such a provocation, so there is no need to show excessive interest and allow North Korea more political effect. There are also political benefits that North Korea can gain from passing this week without provocations, and even if makes a provocation, it can opt for one at a lower level."

Lee Jong-joo, a spokesperson at Seoul's Unification Ministry, said Monday in a briefing that North Korea is expected to hold smaller-scale celebrations for the anniversary this year compared to the past, but will likely mark it with more events than the previous year.

However, its state-run media reported that it will be marking this anniversary with various cultural and sports events, which a Unification Ministry official said Tuesday shows its "confidence" in controlling the Covid-19 situation. North Korea claims to be virus free.