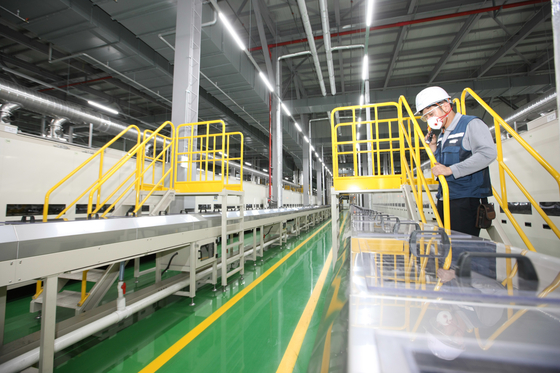 GWANGYANG, South Jeolla – The firing furnaces and conveyor belts were ready to burn and grind materials to make a core component of our future mobility: cathodes.

Cathodes are one of four essential components of lithium-ion batteries, which are used in many electronic devices but particularly in electric cars. The other three are anodes, separators and electrolytes.

Posco Chemical, a subsidiary of Korean steel giant Posco, allowed the media to tour a part of its second cathode factory in South Jeolla, recently.

Sitting on a 50,000-square-meter site located in the industrial city of Gwangyang, the seven-floor building was filled with automated machines and pipelines used to produce cathodes and test their quality. The first factory is nearby and connected to the second one.

Cathodes act as source of lithium ions, which play a decisive role in the battery functions.

They are made from so-called precursors, which in Posco Chemical's case are combinations of nickel, cobalt and manganese. The precursors are mixed with lithium carbonate and then go through additional processing such as being heated, crushed and dried to be made into cathodes.

"With precursors mostly imported from China, the remaining processes are done here with highly automated and unmanned systems to increase manufacturing efficiency and quality control," said Lee Sang-young, plant leader, who conducted the media tour of the factory. 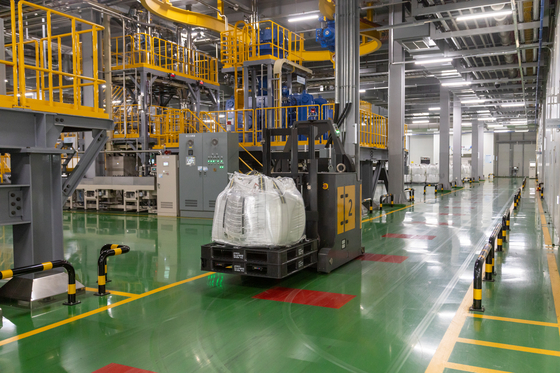 "We have installed devices to reduce any foreign substances in the cathodes since quality standards for the component have increased with more advanced electric vehicles coming to market," Lee said.

Systems maintain positive pressure inside the factory and control humidity.

For quality control, Posco Chemical used what it calls "Air Shooting" technology. A random sample is picked from the manufacturing line and sent to the quality evaluation room through pipelines installed throughout the factory. The sample moves at a speed of five meters per second and arrives at its destination within 30 seconds from anywhere in the factory, the company said.

High pressure air flows in the pipeline to move the samples -- which explains the "Air Shooting" term.

"How much material you can put in the kiln at once and how fast you can process it is what's most important," said Lee. "This is what all other rivals in the market are caring about as well."

The company did not reveal the exact amount of time materials stay in the kiln, but said it takes about 48 hours for the whole manufacturing process.

It is in the process of building a third, which is scheduled to be finished by next February which will add another 30,000 tons of annual production. By 2023, Posco Chemical wants to reach annual cathode production of 100,000 tons with a fourth factory.

All of the output of the Gwangyang plant is sold to LG Energy Solution. It is shipped to the battery maker's factories in Ochang, North Chungcheong and in China and Poland.

Posco Chemical says it plans to diversify its customer base in the future.

"We plan to preemptively set up manufacturing networks around the world by having close partnership with not only domestic battery makers but also global carmakers," said Chung Dae-hun, head of the energy material business unit at Posco Chemical.

"Amid the increasing demand [for cathodes], we are going to bring forward investment plans that will make us global top players in cathode manufacturing by the year 2025."

Chung said that the company is exploring an investment in Europe or the United States. Poland, where LG Energy Solution has a battery factory, is one candidate.

Posco Chemical has recently signed supply deals for both cathodes and anodes with Ultium Cells, a GM-LG joint venture.

It says it aims to grab 20 percent of the global cathode market for lithium-ion batteries by 2030.