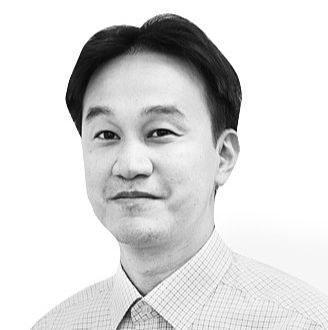 Sohn Hae-yong
The author is the head of economic policy team at the JoongAng Ilbo.


The stunning insults hurled by foul-mouthed Kim Woo-nam, CEO of the Korea Racing Authority (KRA), at people around him defy common sense. The evidence recently obtained by the JoongAng Ilbo from the labor union of the sole horse-racing operator in Korea shows it all. To Kim, a former three-term lawmaker from the ruling Democratic Party (DP), cursing seems to be second nature. He curses his aides just because they didn’t ask him what food he didn’t like before lunch or simply because his subordinates came into his room to report while he’s busy. Dropping F-bombs was just the tip of an iceberg filled of various types of ingenious maledictions. It is difficult to go deeper into the amazing world of imprecation.

The bigger problem is the way he thinks. Kim’s swear words actually were triggered by his attempt to hire one of his former aides in the National Assembly as his chief secretary in the KRA despite the Anti-Corruption & Civil Rights Commission’s recommendations to stop such off-track recruitment. After his botched attempt, Kim commissioned the former aide to work as his advisor with an annual pay of 84 million won ($75,200) and ordered his subordinates to review the introduction of open recruitment for certain jobs in the corporation. Kim regarded major posts in the public entity simply as “trophies” of election victory.

The protagonist of a similar case is Kim Man-soo, the president of KS Dream — a subsidiary of the Korea Securities Depository — who is being condemned for his arrogance. In the mid-2000s, he stepped down as a secretary for President Roh Moo-hyun after violating a presidential ban on golfing for public officials. But after moving to a public entity as an auditor, he was criticized for his inappropriate actions again during work hours. After idling for a while, he shocked officialdom yet again after becoming CEO of KS Dream with an annual pay of 180 million won — five time more than the average salary of its workers.

Since last July when he landed the job as president of KS Dream, he has refused to submit any required documents to the legislature for more than six months. An opposition lawmaker attacked Kim for not presenting any records of how he spent his corporate card for travel and other activities during a legislative audit of the government last September.

State-run research institutes are no exception. Prof. Hong Jang-pyo — President Moon’s former senior secretary for economic affairs — will most likely be appointed head of the Korea Development Institute (KDI). His taking the helm of the government-run think tank not only helps justify the liberal administration’s dangerous “cart before the horse” experiments, but also hurts the integrity and independence of academic research through political considerations. Veteran scholars who worked as senior researchers for the KDI complained that if the designer of the nonsensical policy is appointed head of the most prestigious economic institute in Korea, it will be a “laughing stock.”

I hope the administration and DP consider the idea of legislating a ban on parachute appointments. They can, for instance, stipulate the requirements for appointing CEOs, board members and auditors of public corporations and make public the composition of a committee to recommend candidates for board members. They also can forbid anyone who has worked for a political party or a presidential campaign from applying for heads of public companies for a certain period of time. That could help Moon to at least pretend to work to realize his campaign promise to create a society where “opportunities are equal, the process is fair, and results are just.”