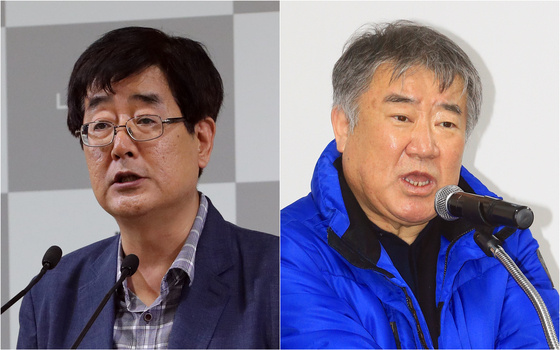 The Blue House said Friday that Presidential Secretary for Culture Jun Hyo-gwan, left, resigned over an allegation of a conflict of interests. The Blue House also said an internal probe found that Kim Woo-nam, CEO of the Korea Racing Authority, had used abusive language when speaking to the workers. [YONHAP]


After only two months on the job, President Moon Jae-in’s secretary for cultural affairs resigned Friday over an allegation of a conflict of interests.

“Although Jun does not admit to the allegations against him, he decided to resign from the post because he doesn’t want to be a burden to state affairs,” Park said. “He said he will respond to the accusations as a private citizen [instead of as a presidential aide].”

The main opposition People Power Party (PPP) raised the allegation last month against Jun, a former secretary general of Arts Council Korea who had served as a key aide to the late Seoul Mayor Park Won-soon.

According to the PPP, Jun founded a cultural event promotion agency, Tea-pot, in 2004. The company was hired by the Seoul Metropolitan Government for 12 projects, worth 5.1 billion won ($4.6 million) in total, from 2015 till 2018.

Jun joined the Seoul city government in 2013 as the head of the Youth Hub Center. The city's mayor was Park at the time, and during Park’s term Jun served as the city's innovation planning officer from 2014 till 2018.

It was during this period from August 2014 until January 2019 that Jun’s company applied for various bids hosted by the city government and won 12 of them.

From its founding in 2004 until 2014, the company managed only small cultural projects. During that time, before Jun joined the Seoul Metropolitan Government, the firm only won four projects from the city.

Following the accusation of a conflict of interests, the Blue House conducted an internal investigation but found no evidence to substantiate the suspicion, Park said.

“The office of the senior presidential secretary for civil affairs questioned Jun and about 50 others including Seoul city government workers and reviewed documents within the possible legal scope, but there was no statement or evidence to substantiate the allegation of a conflict of interests,” she said.

Park also said it goes beyond the power of the Blue House probe to find out what had happed many years ago, saying, “What we have learned so far will be handed over to the investigative authorities.”

Park also announced Friday an outcome of another Blue House probe into the allegation that Kim Woo-nam, CEO of the Korea Racing Authority (KRA), used abusive language when talking to the workers.

“The office of the senior presidential secretary for civil affairs questioned Kim and other workers of the KRA and obtained some recordings of his remarks,” Park said. “We confirmed that he did make abusive remarks to and insult the workers.”

The case will be handed over to the Ministry of Agriculture, Food and Rural Affairs, which oversees the KRA, to start a disciplinary process against Kim, she said.