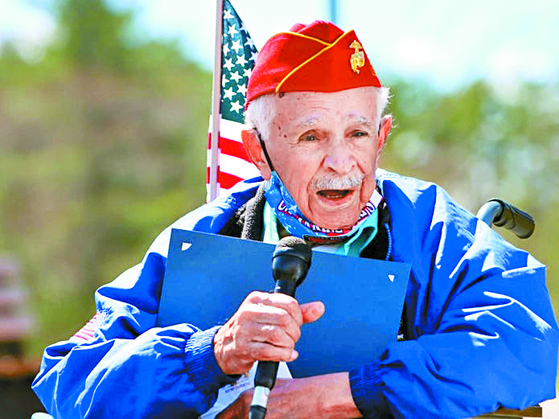 James Ingargiola, a World War II veteran, speaks after he fully recovered from Covid-19 at a hospital in East Bridgewater, Massachusetts, in February. [TOWN OF EAST BRIDGEWATER]


Last week, a special ceremony was held in East Bridgewater, Massachusetts. It was a celebration of the full recovery of 95-year-old World War II veteran James Ingargiola from Covid-19.

He had worked as a plumber at a shipbuilding yard and joined the U.S. Marines, and fought in battles in the South Pacific. He landed on Iwo Jima and personally watched the landmark moment of raising the U.S. flag atop Mount Suribachi on the volcanic island.

Last year, he was treated for lung cancer, and in February, he went to the hospital for dehydration. There, he was diagnosed with Covid-19. As he had gone through many critical moments in life, he thought that may be his last battle. Covid-19 was a frightening obstacle, so he said farewell to his family.

But he was determined to fight back. “It was a tremendous honor to serve, and my whole life I’ve always tried to be a fighter and never give up on anything. This disease was no different,” he said at the ceremony. He wanted to spend more time with his loved ones, 11 sons and daughters, 25 grandchildren and 24 great grandchildren. He is about to welcome one more.

Attendees at the ceremony applauded that the World War II survivor also beat Covid-19. In an interview with Boston Globe, Ingargiola said he was not a hero and never had been. He had only fought each Japanese soldier approaching to kill him, and he had no other thoughts. When he was hospitalized for Covid-19, he focused on breathing and did not give up. Everything was against his favor, but he fought and won.

Over the last year, 130 million people around the world have been tested positive and fought the battle named Covid-19. Many people struggle from aftereffects even after they were declared recovered.

People feel guilt and regret for contracting the virus and fear that they may not recover, leading to tremendous stress and pressure. Here, Ingargiola’s speech is simple yet empowering. The 95-year-old veteran personally appeared on the battlefield and showed how to fight against diseases like Covid-19.