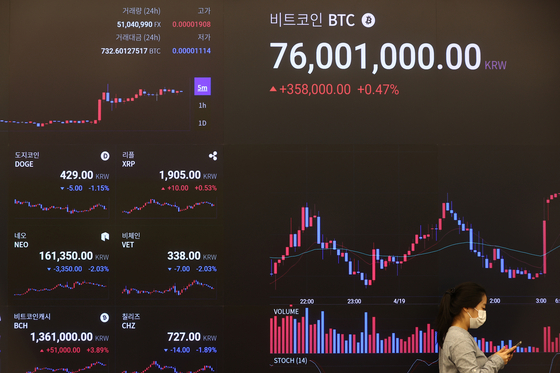 A board at one of Korea's largest cryptocurrency exchange Upbit's office in Seoul shows the value in which bitcoin is traded on Monday. Bitcoin prices have been falling since exceeding 80 million won last week. [YONHAP]


The government has decided to intensify its monitoring of the increasingly volatile cryptocurrency market.

Cryotocurrency values traded in Korea have been more volatile recently than elsewhere around the world.

The Office for Government Policy Coordination on Monday said the government will be closely monitoring the cryptocurrency exchange market through the end of June.

Also participating in the monitoring will be the Financial Services Commission, the Ministry of Economy and Finance, the Fair Trade Commission, the Korea Communication Commission as well as the police.

Financial companies are supposed to be the first line of defense. If they detect suspicious activities, they are supposed to report them to a Korea Financial Intelligence Unit under the FSC.

The Finance Ministry will be looking into violations of the Foreign Exchange Transaction Act.

Chinese investors are suspected of illegally wiring profits made on local cryptocurrency exchanges to China.

Local banks have reported requests from first-time Chinese customers to wire $50,000 to China.

That's suspicious because banks are required to check the source of funds wired overseas if the amount exceeds $50,000.

Chinese investors who bought cryptocurrency in Chinese sell it on Korean exchanges including Bithumb and Upbit, where the prices are higher. After selling the cryptocurrency, they wire the profits home in $50,000 won increments.

It has been estimated that the value of bitcoin in Korea is roughly 15 percent higher than abroad.

This kind of trading was common when bitcoin prices first surged before the bubble popped in 2018.

Other fraudulent acts include companies attracting investors to invest in cryptocurrency pyramid schemes. The targets are often senior citizens with little understanding of cryptocurrency.

“No one can guarantee the value of virtual assets and because it is more speculation than investment, one should be more cautious,” said Koo Yoon-cheol, head of the Government Policy Coordination Office. “One should take special precautions against illegal activities such as pyramid schemes and frauds disguised as virtual asset investment.”

Bitcoin prices have dropped since hitting 80 million won ($71,600) on the local exchange last week. On Monday afternoon, bitcoin was traded around 72 million won. Ethereum, which last week went as high as 3 million won, was trading around 2.8 million won on Monday.

“I have said cryptocurrencies like bitcoin don't actually have underlying value and there are many limitations for them to be used as a payment medium and my views have not changed,” Lee said.

He added that as it is very difficult to set appropriate prices on crypto assets, their prices have been highly volatile and this could mean risks to a country’s financial stability because investments in these assets could end up as bad debt.

The government plans to tax profits made from cryptocurrency investment starting next year.