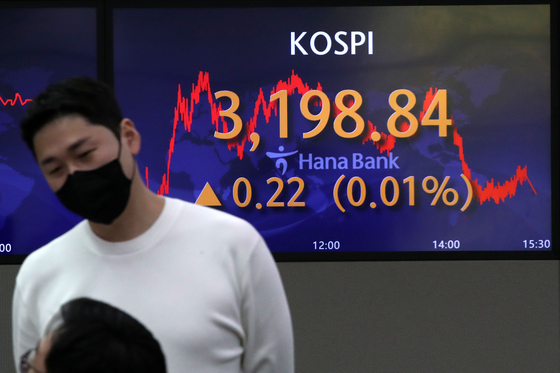 A screen in Hana Bank's trading room in central Seoul shows the Kospi closing at 3,198.84 points on Monday, up 0.22 points, or 0.01 percent from the previous trading day. [NEWS1]


Stocks inched up Monday, extending their gaining streak to a sixth session on expectations of strong corporate earnings in the January-March season. The won fell against the dollar.

Trading volume was moderate at about 1 billion shares worth some 15.2 trillion won ($13.6 billion), with gainers outnumbering losers 462 to 394.

After a muted start, the Kospi gained ground in the late morning to above the 3,200-point mark, buoyed by increased individual and institutional buying that stemmed from hopes of strong first-quarter corporate earnings.

But the key stock index erased most of the earlier gains on increasing valuation pressure in the afternoon, as institutions turned to net selling to lock in profit after a week of gains.

The bio sector performed well amid lingering concerns that the country may need to brace for another wave of the new coronavirus pandemic. Energy and financial shares also fared strong on expectations of economic rebound on a global scale.

The local currency closed at 1,117.2 won per dollar, up 0.9 won from the previous session's close.

Bond prices, which move inversely to yields, closed mixed. The yield on three-year bonds lost 2.6 basis points to 1.129 percent, and the return on the benchmark ten-year government bond rose 0.7 basis points to 1.58 percent.