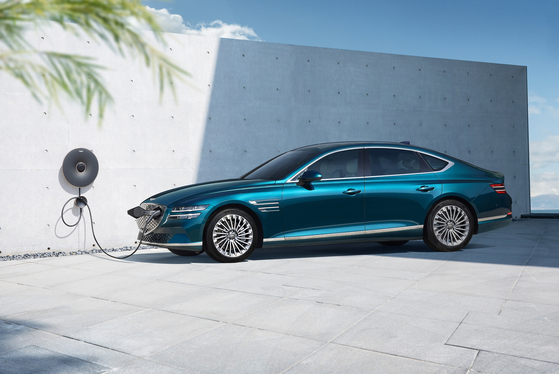 
Genesis debuted its first-ever electric vehicle at the Shanghai International Automobile Industry Exhibition on Monday, choosing the world’s largest car market over its home market for the premier as Hyundai Motor, of which Genesis is an independent brand, struggles in China.

The electric version of Genesis G80 midsize sedan has been equipped with 87.2 kilowatt-hour (kWh) battery and can be driven 427 kilometers on a single charge, according to the carmaker.

It will come as a four-wheel drive version, which is able to generate maximum of 370 horsepower with two electric motors, one at the front and one at the rear. Under the Sports driving mode, the electric car can reach the speed of 100 kilometers per hour within 4.9 seconds, according to the carmaker.

Although not built on the E-GMP, Hyundai Motor’s electric vehicle (EV)-dedicated modular platform, the electric G80 offers functions only available on E-GMP.

The electric G80 is equipped with what’s called vehicle-to-load, or V2L, system, which enables the vehicle to act as a supplementary battery, charging other electronic devices with electricity from its own battery.

It also has a solar roof.

“The world premiere of the first ever electric vehicle of Genesis here in Shanghai shows our strong dedication and commitment to the Chinese market,” said Markus Henne, Chief Executive Officer of Genesis Motor China.

"It takes confidence to create something new. In China, we see this spirit everywhere. Genesis will strive to build authentic relationships with Chinese customers through a new China-tailored business model."

Genesis also showcased the G80 sedan and GV80 SUV at the motor show, which runs through April 28.

Genesis has been taking measured steps in advancing in the Chinese market as it already struggled in the U.S. after entering that market in 2017. It debuted the brand in China earlier this month pledging to target younger drivers, which are major consumers of luxury cars in the country.

Hyundai Motor and Kia, which is 33.9 percent owned by Hyundai Motor, also participated the auto show, displaying the Ioniq 5, the Nexo, an electric version of the China-only Mistra and the EV6.

By unit volume, sales of Kia and Hyundai Motor vehicles in China last year have dropped by 63 percent since 2016.

The exact introduction date of the electric G80 has not been decided yet, but is likely to come to China first before coming to Korea and other markets.

The first electric Genesis model to be made on the E-GMP will be available in the latter half of the year. 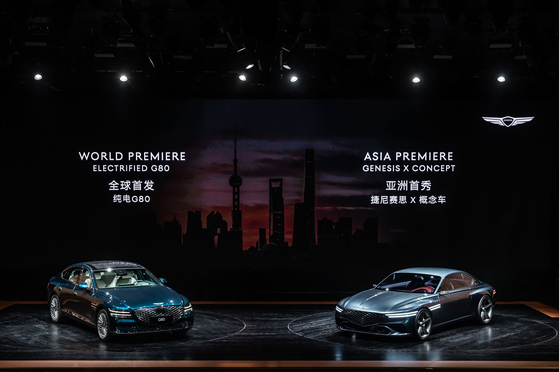 An electric version of the Genesis G80, left, and Genesis X concept model are on display at the Shanghai International Automobile Industry Exhibition on Monday. [HYUNDAI MOTOR]