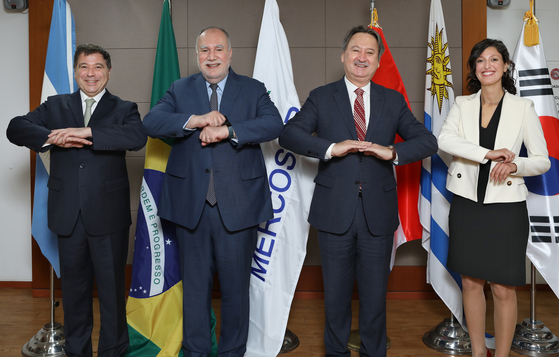 From left, Ambassador of Argentina to Korea Alfredo Carlos Bascou; Ambassador of Brazil to Korea Luis Henrique Sobreira Lopes; Ambassador of Paraguay to Korea Raul Silvero; and Stefany Romero Veiga, deputy head of the Embassy of Uruguay in Korea. The top envoys of representing the full member nations of the Southern Common Market, or Mercosur, spoke with the Korea JoongAng Daily on April 9 at the Embassy of Argentina in Korea, in commemoration of the 30th anniversary of Mercosur this year.The interviewees took off their masks only for the photo session of the interview. [PARK SANG-MOON]

One of the key agendas for the Southern Common Market, or Mercosur, as it celebrates its 30th anniversary this year will be relaunching FTA negotiations with Korea that have been stalled as a result of the pandemic, said top envoys representing key states in the South American trading bloc.

“In this challenging international situation, and given the impact of the Covid-19 pandemic on health, social, and socio-economic areas, we are convinced that practical and joint solutions must be reached,” said Stefany Romero Veiga, deputy head of the Embassy of Uruguay in Korea. “We are committed to advancing with our external agenda, which includes the ongoing negotiations with Korea, Canada, Singapore and Lebanon, while promoting new trade negotiations with partners of special commercial interest.”

Mercosur is an economic and political partnership established by Argentina, Brazil, Paraguay and Uruguay in 1991. Today, it is a bloc of almost 300 million people with a combined GDP of nearly $4.5 trillion, making it the fifth largest economy in the world.

Negotiations for a Korea-Mercosur FTA have been ongoing since 2018. Originally intended to be completed this year, the deadline faced a setback with the onset of the pandemic.

“The original plan was to reach an agreement this year, but due to the pandemic last year, most meetings have been pushed to the virtual platforms,” said Luis Henrique Sobreira Lopes, ambassador of Brazil to Korea.

Brazil is one of the nations in the region facing a surge in Covid-19 cases in recent months, with around 50,000 or more new cases every day since late February. Despite the difficulties at home, the will for continued negotiations is strong, said Sobreira Lopes.

“You have to remember that we are two regions very far apart and with time differences of some 12 hours, and it has been difficult to get the meetings going virtually,” said Sobreira Lopes. “But the efforts for negotiations have continued.”

There were reports last year about Argentina possibly pulling out of the negotiations altogether, but that is not the case, according to Alfredo Carlos Bascou, ambassador of Argentina to Korea.

“As a customs union, we are supposed to negotiate together as Mercosur,” said Bascou. “We remain a full part of the future agreement as we continue negotiating services, investment, public procurement and other chapters.”

The following are edited excerpts of the interview with top envoys of Argentina, Brazil, Paraguay and Uruguay in Korea, during which they relayed expectations for the negotiations this year and why they think an FTA with Korea could be a win-win deal for both parties.

This year marks the 30th anniversary of Mercosur. What are the main objectives of the trading bloc this year?
Raul Silvero: Today Mercosur has one of the most dynamic trade agendas on the planet. It has active negotiations with seven counterparts comprising 36 nations: The European Union, the European Free Trade Association, Canada, Korea, Singapore, Lebanon and Israel, and exploratory dialogues with Vietnam and Indonesia.
Korea is considered a key player for Mercosur members. As it is known, in 2018, negotiations were launched between Mercosur and Korea to reach an [FTA]. The message to get across Korea is that Mercosur aims to reach a meaningful, mutually beneficial and balanced agreement that increases reciprocal trade and investment.

The world has seen a rise in protectionist policies, since the pandemic but also prior to that. Why do you say free trade between parties such as Mercosur and Korea are important at such a time as this?
Stefany Romero Veiga: In Mercosur, and particularly in Uruguay, we believe and stand behind the benefits of free trade founded in rules. In this challenging international situation and given the impact of the Covid-19 pandemic on health, social and socio-economic areas, we are convinced that practical and joint solutions must be reached. Therefore, dialogue, cooperation and commerce between nations are the means to face this challenge, minimizing its effects and accelerating recovery.
Korea represents a key partner for Mercosur as a unit and for each and every of its members. Korea’s economic journey, from the post war to becoming one of the world’s leading economies, is a cause of respect and admiration for our countries.


How do you envision the FTA will be a win-win deal for both Korea and Mercosur nations?
Luis Henrique Sobreira Lopes: Mercosur and Korea´s economies are complementary. For this reason, it is expected that exports of those products in which each country is “stronger” will increase as a result of a greater trade integration. We undoubtedly hope that this will be the case.
However, we expect that this would not be the only relevant result of this "win-win mechanism.” We also hope and estimate that a broad and mutually beneficial trade agreement will generate a greater integration of global supply chains value, to which Mercosur could be integrated beyond its traditional exports, expanding it to other areas where there is also great potential for development by our countries.
Veiga: In Uruguay’s case in particular, there are some goods that would benefit by an improvement in the access conditions into the Korean market, for example bovine and ovine meat, cheese, wool, citrus fruit and wood. It should [also] be pointed out that when talking about better access conditions, we do not only refer to tariff barriers, but also health measures and technical obstacles to commerce, in every area relevant within the framework of negotiations with Korea.


Argentina is the president nation of Mercosur until June this year, but there have been reports last year of its possible withdrawal from negotiations. What is the latest update?
Alfredo Carlos Bascou: There was not such an announcement whatsoever. Argentina continuous to participate actively in every ongoing negotiation. In particular, at the moment we are not taking part of the tariff elimination negotiations with Korea, but we remain committed to go forward with other chapters of the negotiations. As a customs union, we are supposed to negotiate together as Mercosur. We faced the choice of asking our Mercosur partners to stop the entire negotiation with Korea or looking for a new arrangement allowing the continuity of the negotiation. This solution was that we pulled out of the tariff elimination negotiation, while Brazil, Paraguay and Uruguay continue to negotiate with Korea. However, we remain a full part of the future agreement as we continue negotiating services, investment, public procurement and other chapters.


Any updates on the immediate schedule on negotiations?
Veiga: In Korea’s case, the negotiation process is at an intermediate stage. The last round of negotiations was held in March 2020, [but] contact with Korean counterpart [is ongoing] and negotiation continues to advance. Recently, the upcoming negotiation's schedule was agreed between parties.
The Covid-19 pandemic has left no country or region untouched. And that is why, as we continue to fight the virus and prepare for the recovery, our efforts need to be complemented with an ambitious response through international co-operation. This crisis must be an opportunity, a turning point, for reinforced and more effective multilateralism.

The beginning of an elevated alliance