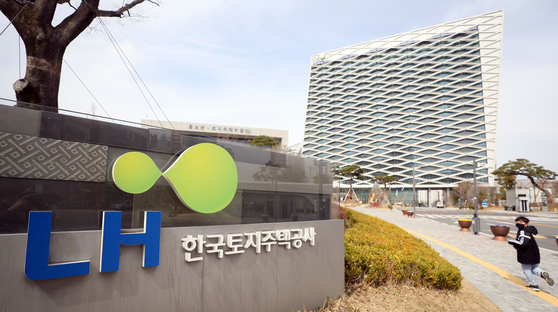 Land and Housng Corp.'s headquarters in Jinju, South Gyeongsang, in March. LH and other public company' debt as of 2017 is equivalent to 23 percent of the country's GDP, the highest among 33 OECD member countries. [YONHAP]


Even before the recent crisis, state-owned companies were stretched, according to a report released Tuesday by the Korea Development Institute (KDI).

The KDI says that in 2017 the debt of these companies was already 23.5 percent of GDP, the highest among the 33 member nations of the Organization of Economic Cooperation and Development (OECD), where the average that year was 12.8 percent.

Japanese public company debt was equivalent to 17.2 percent of its GDP.

The researcher said public company debt has been in a blind spot from the public, unlike direct government debt.

The Korea National Oil Corp.’s debt has exceeded assets since the first half of last year. It is the first time this has happened since the company was founded in 1979.

Korea Resources Corp. has been capital impaired since 2016, with the situation deteriorating further since then.

The state-owned research institute report noted that the government excessively uses public-company capital to finance public projects, and bonds are issued to cover the expenses.

The KDI report noted that it wasn’t difficult for public companies to issue bonds despite weak fundamentals due to their relatively higher credit ratings, as their debt comes with an implicit state guarantee.

Public companies are more dependent on bonds than private companies, which have a more diverse range of funding.

The KDI estimates that annually 4-trillion-won ($3.59 billion) worth of benefits have been generated from the lower interest rates on public company bonds.

Most concerning is the moral hazard created by the government backing. Public companies see no reason to improve balance sheets or profitability.

It is expected to receive nearly 4 trillion won of government funding this year, which is a 30 percent increase compared to the last year.

The KDI noted that public company balance sheets could get worse considering the changing social dynamics, including low birth rates and the aging population, which will result in larger spending on health and welfare.