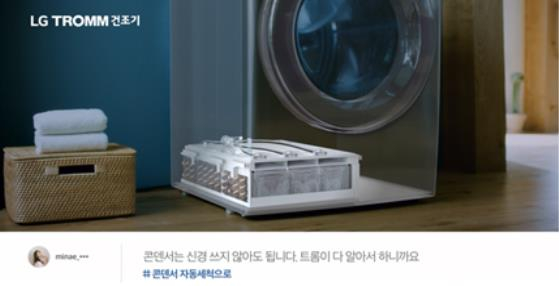 The Fair Trade Commission (FTC) on Tuesday slapped LG Electronics with a 390 million won ($350,000)  fine for false advertising of a popular clothes dryer.

According to the FTC, LG Electronics falsely claimed that Tromm Dual Inverter Heat Pump had a condenser that cleaned itself. Advertisements making that claim ran from January 2017 to July 2019.

The condenser is a key component of a dryer. It pulls moistures from wet clothes, but in the process lint is collected in a filter, which must be regularly cleaned.

Without regular maintenance, the performance of the dryer declines.

It was a popular product and 1.4 million units were sold.

In July 2019, a customer filed a complaint with the Korea Consumer Agency saying the advertisement was misleading, that lint was accumulating in the filter and clothes had a funky smell because they were not properly dried.

A petition to the Blue House was even filed on the issue. Some customers complained their clothes became moldy in the machine.

The FTC said LG clearly violated the law against false advertising. But it kept the fine to less than 400 million won, citing LG Electronics’ free servicing of the machines, and 66 billion won it has set aside for future servicing.

LG Electronics has also promised free repairs of the machines for 10 years.

The company in a statement released Tuesday said it stopped the advertisements in 2019.