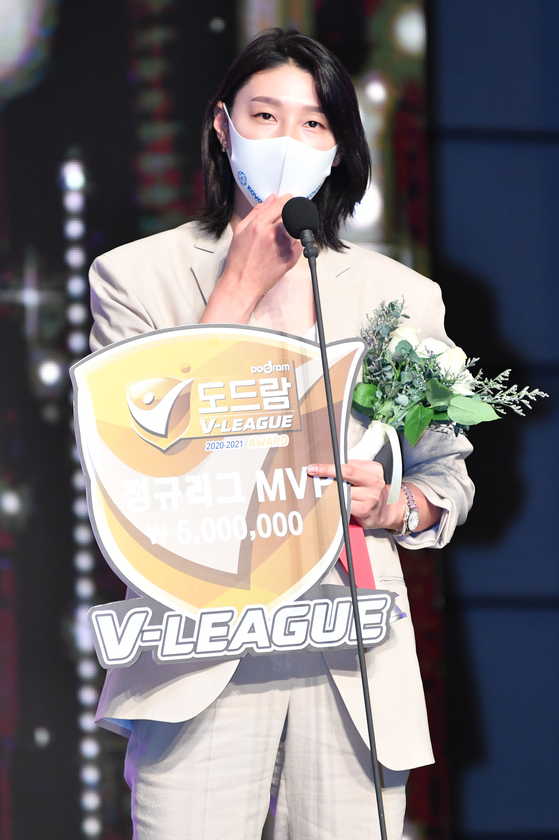 
Kim Yeon-koung was named MVP for the 2020-21 V league season at the Grand Hyatt Seoul Hotel in central Seoul on Monday.

Kim, who played for the Incheon Heungkuk Life Pink Spiders, won with 14 votes out of 31 votes, beating Lee So-young of the GS Caltex Seoul KIXX, who won 12 votes.

This was Kim's fourth MVP award, making her the most awarded athlete in V League history.

Kim was named MVP three times in a row after her debut in the 2005-06 season, when she swept both the MVP and Rookie of the Year awards.

After going on to play in Japan, China and Turkey for 11 years, Kim returned to the V league and the Pink Spiders this season. Even after 11 years away, she still dominated, with a total of 648 points throughout the season, the sixth highest in the league and the highest among Korean players.

Kim is an all-round player, dominating in both offense and defense.

She averaged 0.28 serves a set throughout the season and has the highest offensive success rate, at 45.92 percent.

She's strong at defense as well, despite of her position as an outside hitter, usually the most consistent attacker. Kim had the fifth most digs — a defensive move that sees a player drop to the floor to prevent the ball from touching the court — in the entire league.

However, the Pink Spiders didn't see any silverware this season.

Despite being considered a strong team, the Pink Spiders finished second in the KOVO Cup, the regular season and the championship series.

“The MVP award is not something that you can get for doing well alone” Kim said. “I want to thank my team and teammates.


“It goes without saying that it was a rough season for team. Though I am not sure I will be playing in Korea next season, I will be at by best for the Tokyo Olympics.”

Kim joined the Pink Spiders for the 2020-21 season on a one-year contract in preparation for the 2020 Tokyo Olympics. She has yet to announce where she will be playing next season.

Jung Ji-seok of the Incheon Korean Air Jumbos was named MVP for men’s volleyball. This is his second MVP award, after winning for the 2018-19 season.

Jung has the highest offensive success rate, at 55.43 percent, and made the most points out of all Korean players.

“As a rookie, I used to think ‘when will I ever actually play?’ I looked back at that initial passion for volleyball this season. I am truly humbled,” said Jung.