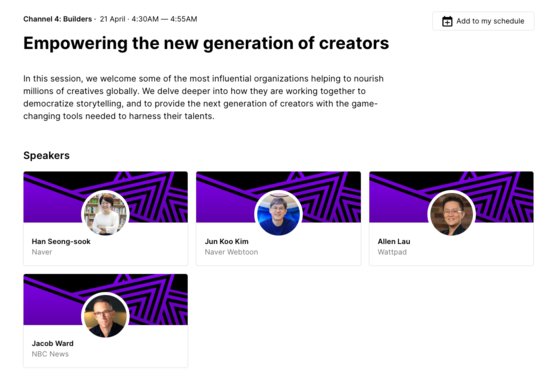 Introduction of a session attended by Naver CEO Han Seong-sook in Collision Conference, an annual tech conference in the U.S. [NAVER]

The idea, revealed by Naver CFO Park Sang-jin in an interview with Bloomberg on Wednesday, is the latest example of Korean tech firms choosing bourses outside of Korea for initial public offerings (IPOs), following rival Coupang’s blockbuster debut on New York Stock Exchange.

Analysts saw Naver’s decision last year to relocate the headquarters of its publishing platform, Naver Webtoon, to Los Angeles as a prelude to a potential IPO overseas. Naver Webtoon’s valuation has been estimated in a range between 6 trillion won ($5.4 billion) and 8 trillion won.

Naver's Park said the company is looking for more opportunities in Japan, Europe, Southeast Asia and Taiwan, adding that overseas expansion is “inevitable” for further growth.

Founded in 2004, Naver Webtoon has the largest monthly active user base of any webtoon-specialized platform in the world. It numbers 72 million.

Naver Webtoon's main rival, Kakao Entertainment, said that it is considering going public in the U.S. It is a webtoon and entertainment management affiliate of Kakao and runs its overseas webtoon business through its comic platform Piccoma.

The CEO of e-commerce company Market Kurly expressed her interest in a U.S. listing earlier this year.

To extend its reach to overseas viewers, particularly in North America, Naver acquired Wattpad, a Toronto-based self-publishing platform, for 653 billion won in January.

That deal made Naver a leading platform operator in the realm of webtoons and web novels, where both amateur and professional artists directly publish their work.

Launched in 2006, Toronto-based Wattpad offers a website and app for amateurs and established writers to share their stories and build a following.

“Gen Z in the world is showing rising interest in digital content – like those created by Webtoon and Wattpad, so the content business built by those intellectual properties will be flourishing, going forward,” Han said at Collision Conference on Wednesday, an annual tech
conference held in the U.S.

She had a joint session with Allen Lau, co-founder and CEO of Wattpad, discussing the future of the webtoon business.