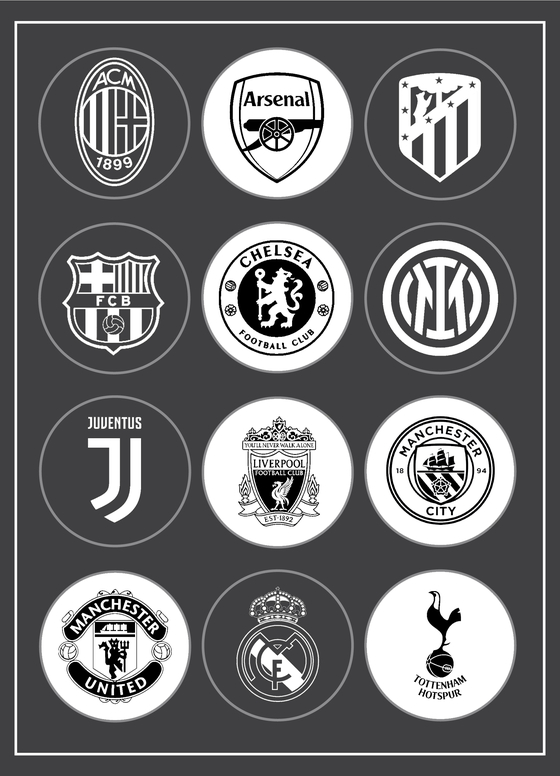 The 12 clubs that attempted to create the breakaway European Super League. [EACH TEAM]

In a series of individual statements, Arsenal, Chelsea, Liverpool, Manchester City, Manchester United and Tottenham Hotspur backed down from their decision to join the breakaway league.

The European Super League, made up of the six Premier League teams alongside Italian clubs AC Milan, Inter Milan and Juventus, and Spanish clubs Atletico Madrid, Barcelona and Real Madrid, was an attempt by the clubs to set up a new midweek league that they directly controlled.

It was seen as a direct challenge to the UEFA Champions League and an attempt at a money grab by the ownership of the 12 clubs, who would have direct control over all revenue, rather than having to share it with domestic football associations and lower-tier teams.

The development of the league appears to have been exclusively led by the ownership and executives of the clubs, and had nothing to do with the management of the teams or their players.

The highly controversial league, announced on Sunday evening, was created despite heavy criticism from existing football organizations and politicians from participating countries. UEFA, European football's governing body, and the English Premier League condemned the Super League, warning that any clubs or players that take part in it could face bans.

FIFA, football's global governing body, said that it would not recognize the competition and has even got so far as to say that any players involved in the Super League will be banned from playing at the World Cup. 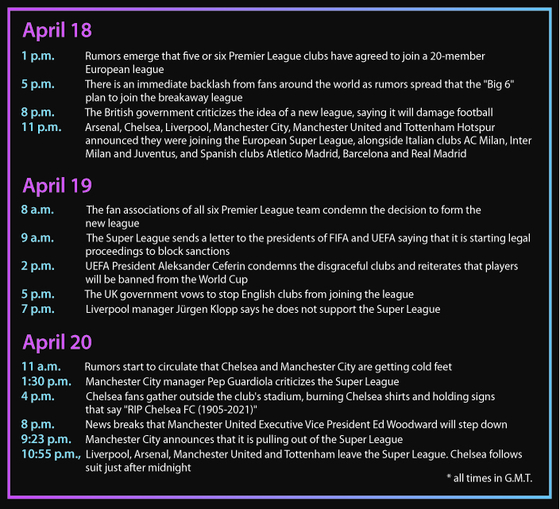 
UEFA reiterated that warning on Sunday, saying that all clubs and players that take part in the competition will be banned from all domestic, regional and international football. British Prime Minister Boris Johnson, meanwhile, threatened legislative action to prevent the English clubs from joining the league.

The reaction from fans was overwhelmingly negative, with protests outside the teams' stadiums over the last two days. The decision would have had global ramifications as well, with players like Korean forward Son Heung-min of Tottenham Hotspur potentially losing their chance to appear for their own country.

While some clubs took the opportunity to apologize and admit they'd made a mistake in their statements, Tottenham Chairman Daniel Levy struck a less contrite tone and attempted to defend the decision in the club's official statement.

"We regret the anxiety and upset caused by the ESL proposal," Levy said. "We felt it was important that our club participated in the development of a possible new structure that sought to better ensure financial fair play and financial sustainability whilst delivering significantly increased support for the wider football pyramid."

"As a result of listening to you and the wider football community over recent days we are withdrawing from the proposed Super League," the club said on Twitter. "We made a mistake, and we apologise for it."

According to multiple reports, it was Chelsea that first decided to pull out of the Super League following the fan backlash. Manchester City quickly followed suit, with the four other "Big 6" Premier League clubs quickly stepping back as well.

AC Milan and Inter Milan are also reportedly looking to withdraw their support, although neither club has confirmed the move. That leaves only Atletico Madrid, Barcelona, Juventus and Real Madrid in the league.

“Despite the announced departure of the English clubs, forced to take such decisions due to the pressure on them, we are convinced our proposal is fully aligned with European law and regulations,” the Super League, headed by Real Madrid President Florentino Pérez, said in an official statement on Tuesday night.

“Given the current circumstances, we shall reconsider the most appropriate steps to reshape the project, always having in mind our goals of offering fans the best experience possible while enhancing solidarity payments for the entire football community. The European Super League is convinced that the current status quo of European football needs to change. We are proposing a new European competition because the existing system does not work."

It could also push local leagues and governments to change the system now to prevent another attempt at getting the Super League off the ground.

British Prime Minister Johnson has already hinted that the English football association could consider following the German model of club ownership, where fans own 51 percent of each club, making it impossible for the club's board to join a breakaway league without the fans' consent. Legislative options like that could still be on the table even though the teams have pulled out of the Super League.

Fans come together to honor Ronaldo after newborn son's death