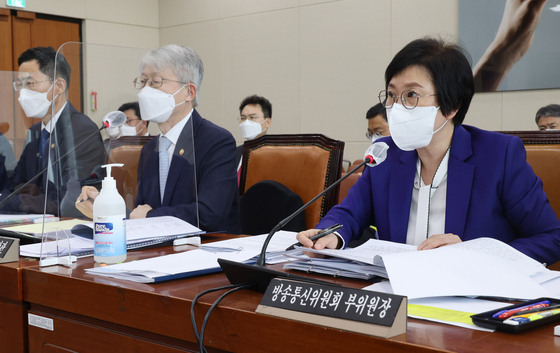 Authorities will launch an investigation into all three major carriers — SK Telecom, KT and LG U+ — to look into the allegation first made by a YouTuber dubbed ITSub last week.

Kim Hyun, vice chair of the Korea Communications Commission (KCC), announced Thursday that Korea’s three major telecom companies will be investigated to check whether users were provided the internet connection they were paying for.

“After the investigation into KT, we are also planning to look into SK Telecom and LG U+,” said Kim.

The accusation first came from tech YouTuber ITSub on April 17.


Both issues were solved by calling KT’s customer service and rebooting the modem and internet server.

On Tuesday, KT met with ITSub and apologized for the inconvenience. The mobile carrier made clear that the slowdown was not intentional, but their mistake.

After KT was accused of providing low-speed connections, others also claimed to have experienced similar internet speed slowdowns.

An anonymous online post on Blind, a social media application for working employees, said that the user’s LG U+ 500-megabit-per-second plan actually had a download and upload speed of 59 megabits and 46 megabits per second, respectively. Another post on online forum DC Inside claimed that SK Broadband’s 1-gigabit-per-second plan only offered an internet speed of 500 megabits per second.

The Ministry of Science and ICT said Wednesday it will look into the terms and conditions of KT’s internet plan and modify necessary measures so that the same problem does not occur. KCC will review whether KT deliberately slowed down users’ internet speeds and if proper compensation is given. Possible violations of the Telecommunications Business Act will also be closely examined.

“We are deeply sorry for the issues,” said Ku during the World IT Show 2021 at Coex in Samseong-dong, southern Seoul. “We will do our best to prevent the recurrence of similar accidents and reduce internet bills for those affected.”