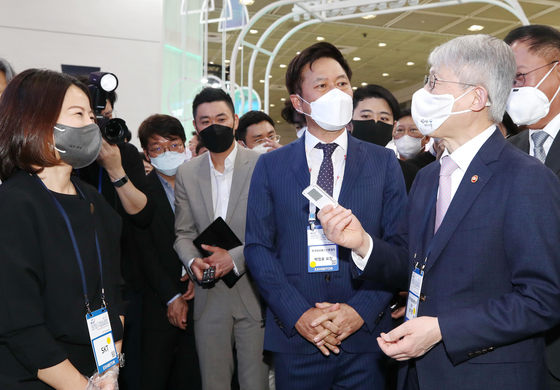 Park Jung-ho, co-CEO of SK hynix, second from right, attends the World IT Show on Wednesday at Coex in southern Seoul. [YONHAP]


One of the CEOs of SK hynix, the world’s second largest memory chip maker, has suggested more of a commitment to contract chip manufacturing, a major shift in the company’s business.

“We will have to make bigger investments into foundry,” Park Jung-ho, co-CEO of the chipmaker, said Wednesday,

“It will provide more opportunities for local fabless companies to develop new technologies if there are foundries offering chip fabrication comparable to TSMC,” he said, referring to the world’s largest contract chip manufacturer, which is based in Taiwan.

His comments came as the world wrestles with a scarcity of chips that started in the automobile sector but has spread to consumer electronics goods.

As electronics makers and car manufacturers all turn toward a handful of contract chip manufacturers, the foundries – including TSMC and, on a smaller scale, Samsung Electronics – find themselves struggling to handle the surging orders.

The foundry business accounts for less than 5 percent of SK hynix revenues.

The company runs a foundry service through SK Hynix System IC subsidiary, which recently relocated its factory to Wuxi, China from Cheongju in Korea.

SK hynix also bought a 49.8 percent stake last year in Key Foundry, a local foundry that was spun off from Magnachip.

Both the subsidiary and Key Foundry primarily fabricate chips based on older manufacturing processes on 8-inch wafers.
Given that he specifically mentioned the TSMC, which utilizes more advanced processes, observers predict that SK hynix is inclined to fund advanced technologies or companies.

“He mentioned that startups find it difficult to develop new technologies because of the shortage,” said a source in the semiconductor industry, “And the chips required for those new technologies are manufactured in smaller, cutting-edge process nodes like 5 nanometer or 7 nanometer and mostly on 12-inch wafers. So, it seems he intended to make advancements in the manufacturing process to produce more high-performing chips.”

Others struck a more cautious note, saying that the remarks are more an expression of long term direction than an immediate shift in its focus.

Since the chipmaker is in the process of completing the acquisition of Intel’s NAND flash memory business, another big buyouts or investment to build new foundry plants could be burdensome in the coming years.

When asked about any ongoing deals, co-CEO Lee Seok-hee said last week nothing is underway, noting the importance of properly closing the Intel deal worth $9 billion, a process scheduled to run through 2025.