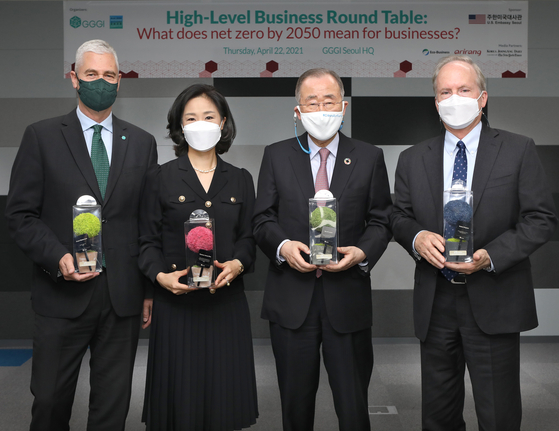 From right, Robert Rapson, charge d’Affaires of the U.S. Embassy in Korea; Ban Ki-moon, president of Global Green Growth Institute (GGGI) and eighth secretary-general of the United Nations; Kim Hyo-eun, deputy director-general of GGGI; and Frank Rijsberman, director-general of GGGI, at a climate forum hosted by the institute and embassy in Seoul on Thursday. The participants are holding a type of air-purifying plant. [PARK SANG-MOON]


Climate change is one area of possible collaboration between China and the United States, said Robert Rapson, charge d’Affaires of the U.S. Embassy in Korea, at a climate conference hosted by the embassy and Global Green Growth Institute (GGGI) in Seoul on Thursday.

The forum was hosted to coincide with Earth Day, and just a few hours before a virtual Leaders Summit on Climate hosted by U.S. President Joe Biden. Chinese President Xi Jinping and Korea’s President Moon Jae-in are among 40 leaders joining the two-day virtual summit Thursday and Friday.

Rapson’s comments followed a recent visit by U.S. Special Presidential Envoy for Climate John Kerry to China. Kerry and China's Special Envoy for Climate Change Xie Zhenhua met in Shanghai last week and released Sunday a joint statement on the “seriousness and urgency” of the global climate crisis. China and the United States are the biggest carbon emitters in the world.

“John Kerry’s visit there was not an accident last week, we went with a specific purpose to see what the boundaries of collaboration might be,” Rapson said. “And the report that President Xi [Jinping] will participate [in the Biden summit] is an encouraging first step.”

The U.S. government is expected to announce ambitious climate action targets at the Leaders Summit on Climate, to conform with the Paris Agreement on climate change which took effect in 2016.

The Donald Trump administration withdrew from the agreement in 2020. The U.S. rejoined in February, just a month after Biden was inaugurated. The Biden administration has announced goals of a carbon pollution-free power sector by 2035.

“The very informed speculation is that we will announce some very ambitious targets and the president will take opportunities to explain how we can get there,” Rapson said Thursday. “As Secretary Blinken noted, the world has already fallen behind on the targets we set six years ago with the Paris agreement. And we now know those targets didn’t go far enough to begin with.

“We hope we can lead by some examples but it’s going to require examples from others as well, and Korea is of course an important leader,” Rapson said. “What Korea does has resonance in many other parts of the world.”

The forum was joined by Ban Ki-moon, former secretary-general of the United Nations and GGGI president and Frank Rijsberman, director-general of GGGI, as well as members of the private sector and diplomatic community in Korea.

“The United States is not the only country in the world, but the reality is that it is the United States who can lead this campaign [against climate change] with a strong commitment,” Ban said at the forum.

“But the campaign cannot be done only by political leaders – the political leaders may set the guidelines, but business communities should also change their behavior,” he added. “I am encouraged that many U.S. companies are leading the efforts to cooperate on sustainable development. […] Here in Korea, there have also been announcements by companies like SK, Hanwha Q Cells and LG Chem to run some of their operations using renewable energy only. But words are not as important as action when it comes to climate change – we will need visible action in the global community.”

Korea’s updated NDCs include reducing its total greenhouse gas emissions by 24.4 percent of the level in 2017, which was 709.1 million metric tonnes of carbon dioxide equivalents, by 2030. It said that it will make another update on the target before 2025 to ensure that it reaches carbon neutrality by 2050.

“We do think Korea has an important leadership role to play not just domestically […] but also in other Asian economies that are significant emitters of greenhouse gases, [that are] strong partners of Korea, and that have not yet committed to net zero,” said Rijsberman. “We have a very short and shrinking window of time left to take decisive action. That has been at the heart of starting this race to net zero by 2050 that is now inspiring governments and private sectors to try to come together to avoid the worst of climate impact.”