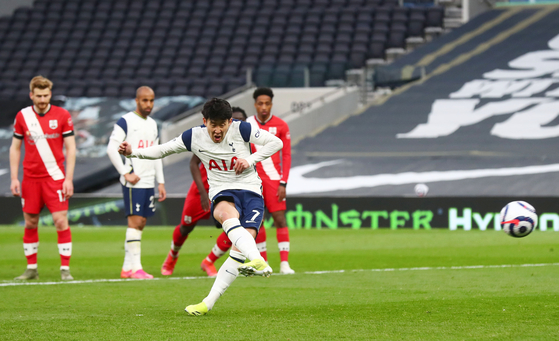 Tottenham Hotspur's Son Heung-min scores their second goal from the penalty spot to take a 2-1 win over Southampton at Tottenham Hotspur Stadium in London on Wednesday. [REUTERS/YONHAP]


Son Heung-min scored his 15th league goal of the 2020-21 season on Wednesday against Southampton at Tottenham Hotspur Stadium in London, setting a new personal best for the most goals scored in a single Premier League season.

The 2-1 win came in Tottenham Hotspur's first game since manager Jose Mourinho was fired on Monday. Instead, interim manager Ryan Mason led the team to a much-needed victory, becoming the youngest person, at 29, to manage a Premier League football club.

Captain Harry Kane was also out for the game with an injury, leaving Son alongside Gareth Bale and Giovani Lo Celso with Lucas Moura out in front.

Despite some early chances, Spurs got off to a slow start and it was Southampton that drew first blood. Danny Ings found the back of the net in the 30th minute, bouncing a header off the post and past Hugo Lloris. Spurs were unable to respond in the following 15 minutes and went into the half down 1-0.

After appearing sluggish in the first half, Mason's team returned with a new energy in the second and it wasn't long before Bale was able to score the equalizer, picking up a stray deflection and turning it straight back into the goal to tie the game at 1-1.

Spurs offensive continued for the rest of the half, but they struggled to get anything across. A Son goal in the 75th minute fell victim to VAR after it was found that Lucas was offside, and the score remained tied into the final minutes of the game.

Son's chance came in the 90th minute, when a poorly timed tackle by Southampton's Moussa Djenepo gave Spurs a penalty — again thanks to VAR. With Kane out with an injury, Son stepped up to the spot and hammered the ball into the right corner to give Tottenham a 2-1 win.

After Southampton dominated the first half, Spurs came back with a vengeance. Mason walks away with a win to kick off his fledgling management career, while Son breaks his personal best for league goals scored in a single season.

Son's 15 league goals breaks the personal best 14 he scored in the 2016-17 season. Across all competitions, Son has scored 20 goals so far this season.

This has been a record breaking season for Son, as he and Kane have also broken the Premier League record for the most goals scored by a specific partnership in a single season in Premier League history, with 14 goals.

With 34 goals throughout their career together at Spurs, Son and Kane are now only three goals away from overtaking the all-time top goal-scoring duo, Didier Drogba and Frank Lampard, who combined on 36 goals during their time playing for Chelsea. Whether they'll be able to manage that feat with only a few games left this season remains to be seen.

Spurs have now moved within two points of fourth-place Chelsea, although they have got a game in hand. The win today will also give them a much needed boost ahead of Sunday's Carabao Cup final against Manchester United.

After a week of turmoil that saw Spurs briefly join the breakaway Super League, fire Mourinho, get threatened with a range of sanctions and then back out of the Super League, but without the contrite apology most clubs opted for, the win could help reset the table for the London club.

There were protesters gathered outside Tottenham Hotspur Stadium on Wednesday night, but only about 100 as the immediate fury over the Super League moved has dampened as fans and officials look for a more permanent solution to the issue.