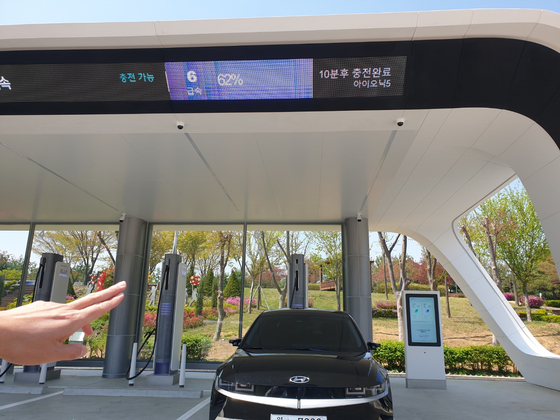 The E-pit station at the Hwaseong highway rest area in Gyeonggi.[JIN EUN-SOO]


Under a sleekly designed canopy sit six EV chargers that are installed with a 350-kilowatt ultra-rapid charging system, the fastest available in Korea, and a package of digital services that will make the charging process a whole lot more convenient.

The chargers take the shape of a slim supplementary battery with LED-lit bars that show the charging status of the plugged-in vehicle.

Instead of having to seek out an EV charger that is already occupied or having to wait in line until a car owner arrives, the E-pit allows digital queuing, either through a waiting number issued at the kiosk next to the charger or through a mobile app, if the driver stays within 1 kilometer (0.6 miles) of the station.

The charger also uses an automatic mobile payment system where the electricity fee is automatically charged through payment information saved on the mobile app.

The large digital screen installed on the front of the canopy show how much time is left for the plugged-in vehicles to finish charging.

The E-pit is Hyundai Motor's first branded charging infrastructure, similar to Tesla's Supercharger network, which the Korean carmaker recently opened ahead of the scheduled launch of its new EV range.

It offers more benefits to Hyundai-made EVs, such as discounts and faster charging speeds, but other EVs that use the same type of connector — the DC Combo type — can still use the station.

The station will open at 12 locations on highway rest areas and eight more will be built in cities within this year.

"Away from having to find the charger and worrying about the range, EV owners confront many unexpected inconveniences at the chargers, like the complicated payment system and finding an empty charger. The E-pit can take away such difficulties," said Joh Hyun-haeng, senior manager at Hyundai Motor's EV infrastructure team.

"Other retail services can be added in the future, and they should differ depending on whether they are located on highway rest areas or in the city."

Charging infrastructure is a prerequisite for EV adaptation and considered one of the main reasons why consumers feel reluctant to buy an EV.

The Ministry of Environment said early this year it would fasten the setup of charging infrastructure in Korea as well as partially finance companies building their own.

It said it would expand the number of rapid chargers, which stood at 9,800 units as of last year, to 12,000 units this year and to 20,000 units by 2030. Rapid chargers will be built around highway rest areas or near gas stations where demand for quick charging is high. Ordinary chargers will also increase by 84,000 units within this year. 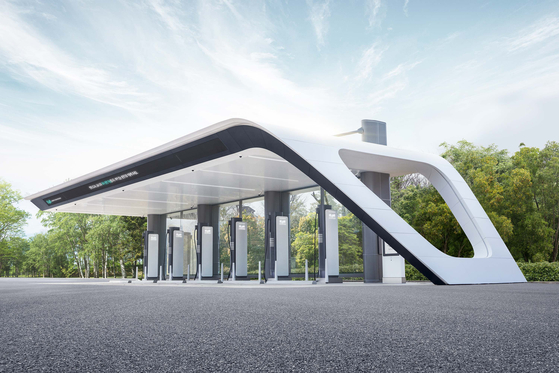