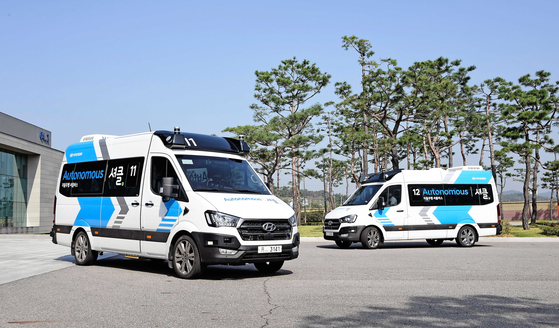 Hyundai Motor will operate on-demand, self-driving buses within the R&D Center and develop a control system for the vehicles.

The automaker will also build a parking tower for self-driving cars.

Hyundai Motor has started operating four self-driving buses with Level 4 autonomy technology early this month. Level 4 self-driving vehicle is able to operate on its own under ordinary conditions. Human intervention is rarely required.

The buses are on-demand and operate only when people signal for the vehicle to stop.

“The ordinary shuttle buses which operate within Namyang R&D Center stop at all 45 stations,” the company said.

“The robot buses, however, don’t stop by at a station when there is no passenger that wants get off the bus or get on the bus there. This system shortens the travel time for the passengers.”

This bus also doesn’t operate on fixed routes, according to Hyundai Motor.

When the passenger calls the bus through a mobile app, the vehicle nearby calculates the fastest route to the passenger.

When there is an unexpected situation on the road, such as when one of the routes is blocked due to construction, Hyundai employees can intervene with the newly developed control system, the company said.

Hyundai Motor also plans to build a parking tower that is able to accommodate self-driving cars.

The parking tower will have straight, curved and ramp courses and will be built using asphalt, epoxy and concrete for the floor in order to test and collect data.

The eight-story parking tower, which is able to accommodate up to 600 vehicles, will be completed by the end of next year.

Computer-generated image of a parking tower for self-driving cars that is slated to complete construction in the latter half of next year at Hyundai Motor's Namyang R&D Center. [HYUNDAI MOTOR]