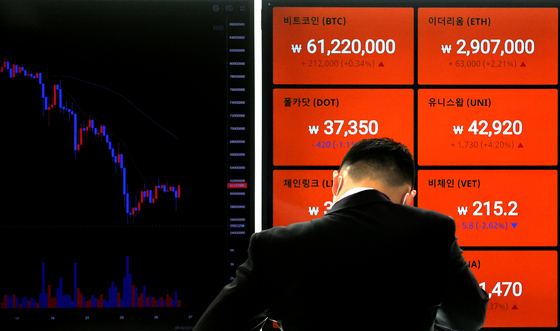 A passerby looks at prices of cryptocurrencies including bitcoin on a digital signboard operated by a local cryptocurrency exchange, Bithumb, in Gangnam District, southern Seoul, on Monday. Bitcoin prices on Monday slightly recovered from their fall to 55 million won ($49500) last week. [YONHAP]

Bitcoin prices rebounded slightly on Monday afternoon to the 62 million won ($55,800) level after falling to as low as 55 million won last week -- a plunge attributed to negative comments on cryptocurrencies by Korea's financial regulator.

Despite the recovery, investors are unsure whether the recent slump is a temporary adjustment or the start of the kind of nosedive that caused massive investor losses in 2018.

Earlier this month, bitcoin prices soared above 80 million won per coin after the listing of the United States' largest cryptocurrency exchange, Coinbase, on the Nasdaq. That was considered a major step for cryptocurrencies to become a mainstream investment asset.

Eun also warned that all cryptocurrency exchanges in Korea could be forced to close by the latter half of the year, adding, "Cryptocurrencies are highly speculative virtual assets without any intrinsic value.”

Small cryptocurrency exchanges could be forced to close down under an amendment to the Act on Reporting and Using Specified Financial Transaction Information that mandates all exchanges dealing with cryptocurrencies find banks that are willing to issue real-name accounts for their customers. Banks are reluctant to do so due to potential risks involved with cryptocurrency trading.

Eun was criticized by people in their 20s and 30s fond of bitcoin, especially as the government still plans to impose a tax on gains exceeding 2.5 million won from cryptocurrency trading from next year.

A petition was uploaded on the Blue House website on Friday, a day after Eun's comment. The petition asked Eun to resign.

The petition has been signed by 131,430 people as of press time.

Hwang Sei-woon, a senior researcher at the Korea Capital Market Institute said the time has come for financial regulators to mull ways to make cryptocurrency trading more transparent and stable. At the same time, it's wrong for investors to blame the government for any investment losses.

"People tend to think protecting investors is protecting them from losses," Hwang said. "But that's not how investment works."

"Bitcoin prices have already been rising at speeds that can't be explained reasonably," he said. "I think right now is the beginning of bitcoin's temporary price adjustment, which would involve price declines, but I don't know how long the adjustment will go."