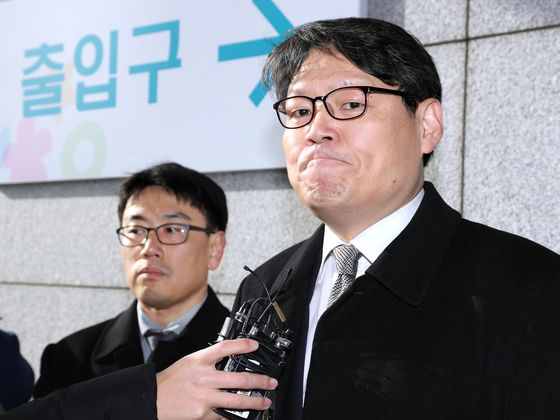 In this file photo, Lee Kwang-cheol, presidential secretary for civil affairs, right, enters the Seoul Central District Prosecutors' Office on Jan. 29, 2020, to be questioned about allegations that Blue House officials had tried to influence an Ulsan mayoral election in 2018. [YONHAP]


A probe into a dubious travel ban on a vice minister from the previous administration has reached the Blue House as a presidential aide was questioned as a suspect.

The Suwon District Prosecutors’ Office said Saturday that Presidential Secretary for Civil Affairs Lee Kwang-cheol was questioned as a criminal suspect over suspicions that he arranged an illegal travel ban on former Vice Minister of Justice Kim Hak-eui in 2019. According to prosecutors, Lee was questioned from 10 a.m. till 8:30 p.m. on Saturday.

Lee gave no response to a JoongAng Ilbo interview request.

The prosecution has been investigating whether the Ministry of Justice and Lee Gyu-won, a prosecutor from the Supreme Prosecutors’ Office, circumvented the law in 2019 to slap an overseas travel ban on the scandal-plagued Kim, who was being investigated for taking bribes and sexual favors from businessmen from 2006 to 2009.

Kim resigned as vice justice minister in March 2013 after just six days on the job, following circulation of a video that appeared to show him engaging in sexual intercourse with a woman at a party. He was investigated by the prosecution in 2013 and 2014 but cleared each time.

A third probe, ordered by President Moon Jae-in, was done by the Supreme Prosecutors’ Office in March 2019.

Kim was stopped from leaving for Bangkok from Incheon International Airport on March 23, 2019. Just 10 minutes before departure, he was stopped by immigration officers from boarding the plane. It was later revealed Prosecutor Lee had requested an emergency travel ban two minutes earlier.

Kim was eventually jailed in October 2020 after an appellate court overturned an earlier acquittal on a bribery charge.

Sources informed about the probe told the JoongAng Ilbo that Lee Kwang-cheol, who was an assistant aide in the Blue House in March 2019, played a key role in Kim’s travel ban.

Under the Immigration Act, an emergency overseas travel ban is only applied if a criminal suspect is accused of a felony punishable by more than three years in jail and if there is the risk of flight or evidence destruction. Kim was not a criminal suspect in any investigation when the travel ban request was made.

Sources informed about the investigation said that Prosecutor Lee sent a photo of the paperwork of the travel ban on Kim to Lee.

Prosecutor Lee and Cha Gyu-won, head of the Korea Immigration Service, which is under the Justice Ministry, were indicted earlier this month on charges of falsifying an official document and abusing power.

Lee is the first member of the Moon Blue House to be questioned by the prosecution over the illegal travel ban case. The Blue House made no official comment on Lee's questioning.

Lee, a progressive lawyer, joined the Blue House shortly after Moon’s presidential victory in 2017 as a senior assistant secretary. He was promoted to presidential secretary for civil affairs in August 2019.

In January last year, Lee was questioned by prosecutors over an allegation that he abused power to help Moon’s friend, Song Cheol-ho, win the Ulsan mayoral election in 2018.