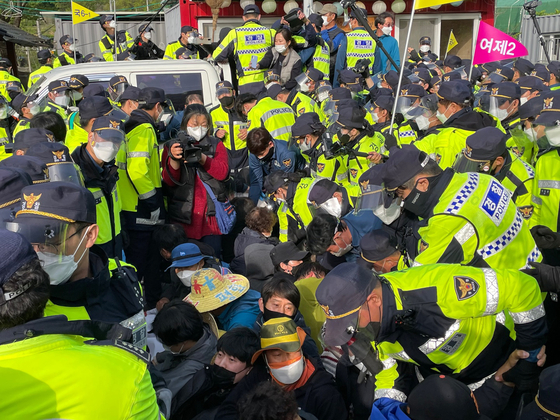 
Police and protesters scuffled outside a controversial antimissile base Wednesday for the second time in two months as the activists tried to hinder work to improve the facility.

The Ministry of National Defense said Wednesday that the shipment of construction materials, equipment and a power generator into the Terminal High Altitude Area Defense (Thaad) base of the U.S. Forces Korea in Seongju, North Gyeongsang, was completed as scheduled.

But the delivery did have a hiccup. Around 7 a.m., 30 protesters started a sit-in at the entrance of a road heading to the base, effectively blocking the passage of vehicles.

About 2,000 police troops responded to disperse the protesters. After a violent scuffle, the police managed to remove them from the road around an hour later, allowing 50 vehicles including 30 trucks carrying constructional materials and a power generator to enter the base. The convoy soon after started entering the base, and the transport was completed in 10 minutes. 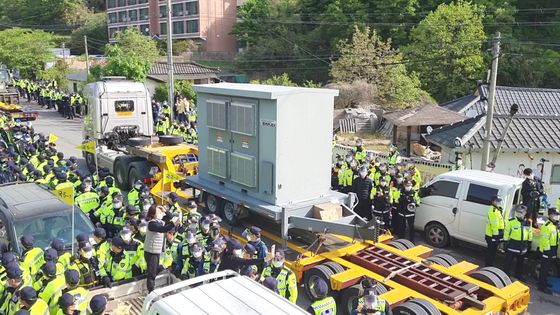 A transportation vehicle carrying a power generator heads to the U.S. Forces Korea's Seongju base on Wednesday. [NEWS1]


The organizer of the rally said three protesters were injured during the process.

This was the second time in 62 days that protesters and police clashed outside the Thaad base. The first scuffle took place on Feb. 25, when the military authorities of the two countries also tried to move construction materials into the base.

The Ministry of National Defense had announced Tuesday that it was expecting another delivery on Wednesday. In order to improve working conditions of the Korean and American soldiers stationed at the Seongju base, construction materials and equipment, a mobile power generator and other supporting materials will be delivered, the ministry said.

According to the ministry, one of the two power generators installed in the base in 2017 to operate the Thaad system was replaced through the latest operation.

While the ministry said the construction had nothing to do with improving the Thaad system, the protesters, comprised of anti-U.S. military activists and residents of nearby villages, suspected that the shipment was intended to upgrade the capabilities of the antimissile system.

Over the past years, the protesters and police have been repeating their confrontations whenever U.S. and Korean militaries tried to make shipments into the base. In addition to the Feb. 25 scuffle, violent clashes also took place on Jan. 22 and Nov. 27, 2020.

While food and other lightweight goods are transported through helicopters, construction materials are moved by trucks. There is only one road to the base.

“Because of the delivery hardships, Korean and U.S. soldiers on the Thaad base are living inside shipping container homes, not barracks,” said a Defense Ministry source. Currently, about 400 Korean and American soldiers are stationed at the base.

When U.S. Defense Secretary Lloyd Austin visited Korea last month, he reportedly expressed discontent with the living conditions at the Thaad base.

Seoul and Washington agreed on the deployment of a Thaad battery in July 2016. Components of the battery arrived at the U.S. military’s Osan Air Base on March 7, and a radar system and two launchers were installed on a former golf course in Seongju on April 26 — less than two weeks before the May 9 presidential election that brought Moon Jae-in to power.

Shortly after he took office, Moon halted the deployment and ordered an environmental survey to boost the legitimacy of the process. But after North Korea fired intercontinental ballistic missiles in July, Moon ordered aides to start discussions with the United States on completing the deployment.

In September 2017, the deployment of a Thaad battery, consisting of six launchers, 48 interceptors, a fire control and communications unit and radar, was completed. 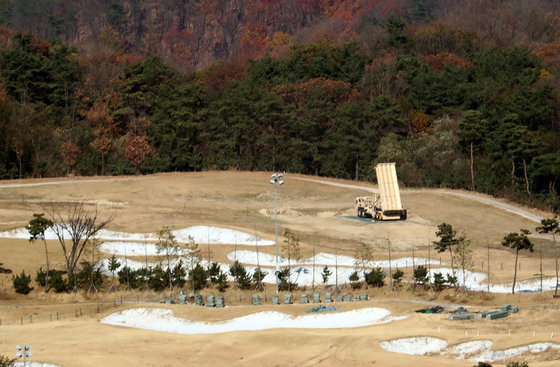 In this file photo from Nov. 12, 2017, an antimissile launcher of the Terminal High Altitude Area Defense system is installed in the Seongju base, built inside a country club in North Gyeongsang. [YONHAP]


The Moon government, however, said the installation is temporary. A full-scale environmental study to authorize the permanence of deployment is still pending. At the time, the Ministry of National Defense said the environmental study will take about one year, but no progress has been made.

According to Rep. Ji Seong-ho of the main opposition People Power Party (PPP), the Ministry of National Defense has not requested the Ministry of Environment to start the survey. “In order to properly operate the base, it is crucial to permanently install the system, but the Defense Ministry didn’t even ask the Environment Ministry to start the environmental survey. Not only was there no progress over the past four years, it is even unsure whether the system will be formally installed before Moon’s presidency ends,” Ji said.

The protesters also stress the need for the environmental survey, saying it is illegal to start construction on the Thaad base or upgrade the capabilities of the antimissile system before the Thaad system is authorized for permanent installation.

They also complained that the government had broken social distancing measures by mobilizing massive numbers of police troops to disperse the protesters amid the Covid-19 pandemic. “Many of the villagers are elderly people, but the government sent massive amounts of police troops for the U.S. Forces Korea,” said a protester. “That threatens the safety of both the villagers and the police.”

Meanwhile, North Korea fired two missiles last month on March 25, with a range of 450 kilometers (280 miles). The North Korean launch site of Hamnam is exactly 450 kilometers away from the Thaad base in Seongju.