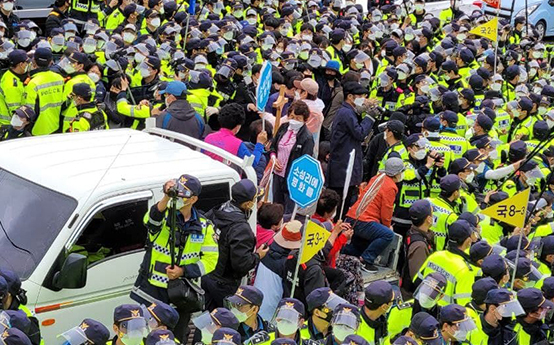 
Police and protesters scuffled outside a controversial antimissile base on Thursday for the fifth time this month as activists tried to hinder the military's transport of goods required to operate the facility.

The Ministry of National Defense and the U.S. Forces Korea (USFK) sent dozens of trucks carrying construction materials and food into the Terminal High Altitude Area Defense (Thaad) base of the USFK in Seongju, North Gyeongsang. It was the fifth shipment this month, following deliveries made on May 14, 18, 20 and 25.

Around 7:40 a.m., more than 100 protesters started gathering outside the Soseong-ri Community Center in Chocheon-myeon of Seongju, located at the entrance of a road heading to the base. They planned to block the road to stop the passage of vehicles, but about 1,100 police troops were mobilized to physically disperse the protesters.

During the process, some resident protesters were stuck inside the community center or on top of some trucks, unable to leave for hours.

"The police's brutal human rights violations are growing more serious as they repeat their operations to stop the protesters," an activist group demanding the withdrawal of the Thaad system said in a statement. "The village of Soseong-ri is not a diplomatic tool of the Moon Jae-in administration. The police must also leave the village."

Based on an agreement between Seoul and Washington on the Thaad deployment in July 2016, U.S. military partially installed the system on a former golf course in Seongju on April 26, 2017 — less than two weeks before the presidential election that brought Moon to power.

Shortly after he took office, Moon halted the deployment and ordered an environmental survey to boost the legitimacy of the process. But after North Korea fired intercontinental ballistic missiles in July, Moon allowed the U.S. forces to complete the deployment.

The Moon government, however, said the installation is temporary. About 400 Korean and American soldiers total are stationed at the base, but they are living inside shipping container homes, not barracks.

Whenever U.S. and Korean militaries try to make shipments into the base, protesters and police have been on the scene, clashing. While food and other lightweight goods are transported through helicopters, construction materials are moved by trucks. There is only one road to the base.

Protesters, however, said the frequent shipments are a signal that the permanent installation of the Thaad system is imminent.

As the confrontations have continued for years, the Ministry of National Defense, Seongju County Government and residents of the villages near the base formed a trilateral consultation body on Monday.

Their attempt, however, had little effect in stopping the scuffles between protesters and police as they clashed twice this week, on Tuesday and Thursday.