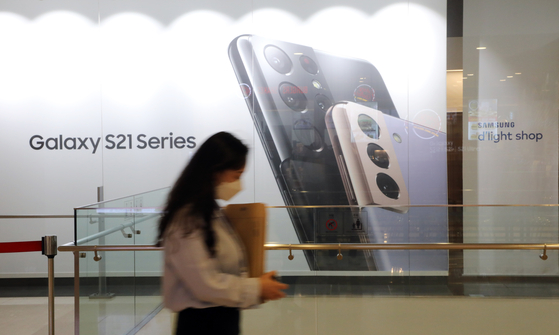 An advertisement promoting the Galaxy S21 series is attached at Samsung Electronics' office in Seocho-dong, southern Seoul, on Thursday. [YONHAP]


Samsung Electronics announced record revenues for a first quarter on Thursday as robust smartphone and consumer electronics sales cushioned the impact of a weak chip performance due to a suspension of manufacturing at a chip plant in Austin, Texas.

Sales rose 18 percent on year to reach 65.39 trillion won ($59 billion) in the first three months, the highest figure ever for a first quarter. 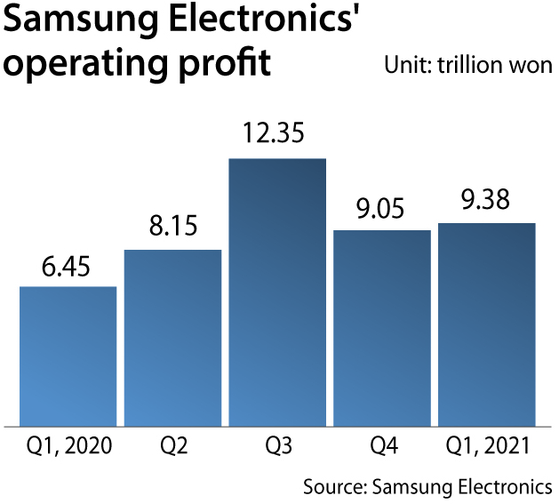 Operating profit jumped 45.53 percent to 9.38 trillion won compared to the same period last year, which was in line with an earnings guidance released by the company earlier this month.

The base effect helped the yearly comparison as sales of electronic gadgets took a hit in last year's first quarter as the pandemic started taking hold. Compared to the previous quarter, sales went up 6 percent and operating profit 4 percent.

A highlight of the latest result was a sudden profit shrinkage in semiconductors. Profit from that business accounted for half of Samsung Electronics’ operating profit last year.

The semiconductor business reported 3.37 trillion won in operating profit in the first quarter, down 14.2 percent on quarter and 18.4 percent on year. Chips had been the company's largest contributor to earnings since the second quarter of 2016. In the first quarter, the smartphone division reclaimed that crown.

The downbeat results for the chip division, the lowest operating profit since the third quarter of 2019, was attributed to losses tied to suspension of production at the Austin factory and the cost of expanding production of more high-performing chips.

Disruption of the production in Austin was estimated to cost in the range of 300 billion won to 400 billion won, according to Han Seung-hoon, a senior vice president at Samsung's foundry business, during a conference call.

“The semiconductor business saw an earnings decline quarter-on-quarter despite solid memory shipments, mainly due to the production disruption at the Austin fab plant, and a downward trend in NAND prices, while initial costs of new line ramp-up associated with advanced node migration also weighed on the results,” Samsung Electronics noted in a statement.

The company made facilities investments of 8.5 trillion won in its semiconductor business between January and March. A significant portion of that was believed to be for a second plant in Pyeongtaek, Gyeonggi. The factory, named P2, will produce a wide range of chips including dynamic random access memory (DRAM), NAND flash memory and system-on-chips via contract chipmaking.

The mobile communications division that produces smartphones and network equipment reported operating profit of 4.39 trillion won, a 65.7 percent increase on year and a 81.4 percent increase compared to the previous quarter.

The releases of the Galaxy S21 smartphone and the budget A-series during the quarter boosted profit while the network business gained thanks to the growing adoption of 5G networks across the globe.

The consumer electronics business generated 1.12 trillion won in profit, up 59.8 percent on year as demand for home appliances was strong.

Looking forward, the company expects the semiconductor business to recover with the Austin plant back to full operation and an anticipated rise in chip prices. Smartphone sales, however, will likely decline in the second quarter as the effect of new releases will subside.

LG Electronics also reported record profit and revenue in the first quarter, backed by robust sales of home appliances.
Its result came months ahead of the company closing its money-losing mobile phone business, which could further lift profits.

Sales came in at 18.8 trillion won, up 27.7 percent on year and also a record high, as demand for home appliances and TVs was strong.