In the case of a presidential pardon for Samsung Electronics Vice Chairman Lee Jae-yong, journalists could be under attack whether they support it or not. I have a personal experience when I reported about Samsung Motors filing for court protection in June 1999. Although I kept the story to myself, I got a call from the industry minister.

The minister opposed the publication of my article. His argument was that if the story went in the JoongAng Ilbo, readers would think the newspaper was colluding with Samsung. He warned about the negative effects for both Samsung and the paper. The JoongAng Ilbo was not a part of Samsung, but the two were still regarded as a family. The story was published nevertheless, and as the minister warned, the backlash was not small. Since then, I have come to deal with Samsung-related issues carefully or turned away. Still, I cannot keep silent on the issue of pardoning Lee.

The campaigning for Lee’s pardon could be burdensome for the person behind the bars as well as the Blue House, which holds the key. First of all, the timing is not good. Though President Moon Jae-in has the authority to pardon an inmate, it cannot be used randomly. Pardoning a chaebol tycoon is politically safer when a leader bundles it with other businessmen and other people serving prison terms for misdemeanors.

Issuing a presidential pardon on May 19 — the national holiday to celebrate Buddha’s birth — would be too early and granting amnesty on the Aug. 15 Liberation Day is too far away. Public sentiment could turn by then.

Personal or political interest is not the essence of the issue. This should be all about national interest. The heads of the country’s five largest business lobby groups and the religious community are petitioning for his release given the gravity of the tech war between the U.S. and China. If Samsung crumbles in the chip war, the toll is a heavy blow to the Korean economy. Lee’s imprisonment can send China, in particular, the wrong signal that Korea prioritizes its outdated politics over its world-class enterprise. In the chip war, Samsung has the upper hand. But the government does not. Washington and Beijing would find it easier to push around the government. They would bet on the government to sway Samsung. To stop their calculation, Lee is better to be released faster than later. 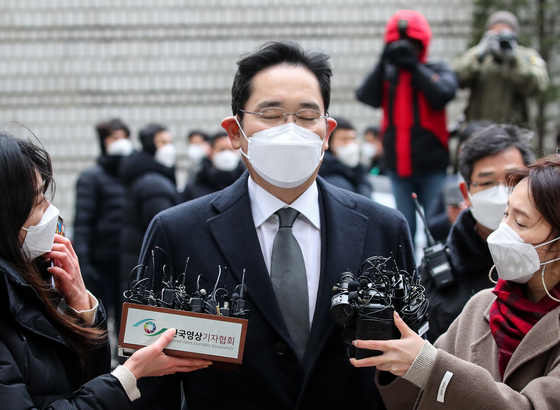 Samsung Electronics Vice Chairman Lee Jae-yong interviewed by reporters ahead of the verdict being read at the Seoul High Court in Seocho-dong, southern Seoul, on Jan. 18. He has since been serving a jail term for bribery.

But ideological division in Korea could get in the way. To the mainstream of the ruling front, chaebols are predatory and greedy entities that should be regulated. They believe forcing them to share their profits can achieve fairer distribution. The dogma on economic democratization, fairness and distribution is the centerpiece of the liberal administration and philosophy. Pardoning Lee under such circumstances translates into denying — and destroying — its inviolable beliefs. Furthermore, releasing a convicted tycoon could be seen as a sign for the government to embrace the corporate sector, a promise not to take the economy hostage to politics, a willingness to ease regulations on companies, and a dramatic turnaround from its alleged crusade to nationalize private enterprises. From a broader perspective, Lee’s release would translate into a fundamental shift from its original governance philosophy.

Releasing Lee may not be easy for Moon, especially with the next presidential election scheduled for March next year. Under the current scenario, Gyeonggi Gov. Lee Jae-myung in the liberal camp could be pitted against former Prosecutor General Yoon Seok-youl and a presidential candidate from the opposition People Power Party in the conservative camp. In that case, the ruling force must pay heed to its support base that puts partisan interest before national interest. Therefore, pardoning Lee is unthinkable for them. It is why the Blue House said it had not reviewed or considered the review of Lee’s pardon.

No one knows if Moon will defy all challenges and execute the pardon. But given his track record of prioritizing ideology over national interest, a pardon may be far-fetched. As a result, the sinking of Korea Inc. may come sooner. Extending the governing term may not be meaningful if it is without the No. 1 semiconductor company and industry.

A great leader impresses the people with a single bold move. This may be the last chance for Moon to save the country.