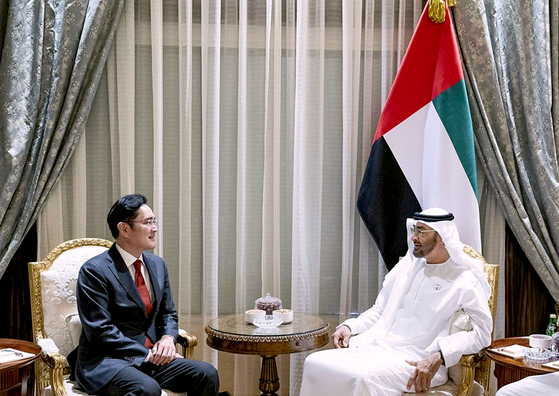 He is set to leave for an unspecified country in the Middle East on Monday evening, according to a source with knowledge of the matter.

“Lee will fly to the Middle East region this evening,” the source said, without detailing an itinerary.

The departure comes just weeks after the vice chairman returned from United States, where the chipmaker is investing $17 billion in a semiconductor plant.

According to press reports, Lee will be meeting Crown Prince Sheikh Mohammed bin Zayed Al Nahyan in the UAE. They met previously in 2019.

At that time, they shared thoughts on artificial intelligence and 5G technology business.

According to other reports, he will also be visiting Egypt and Saudi Arabia.

Samsung Electronics runs a television factory in Beni Suef, Egypt, and the location is a central point for the marketing of appliances to the Middle East and Africa.

“Vice chairman Lee has tried to up the importance of the Middle East because it could provide great opportunities with many parts of the region having relatively underdeveloped technology infrastructure,” said the source.

Lee may also head to Europe, according to other reports.

ASML, an equipment supplier critical to high-performing chip production, is based in the Netherlands.