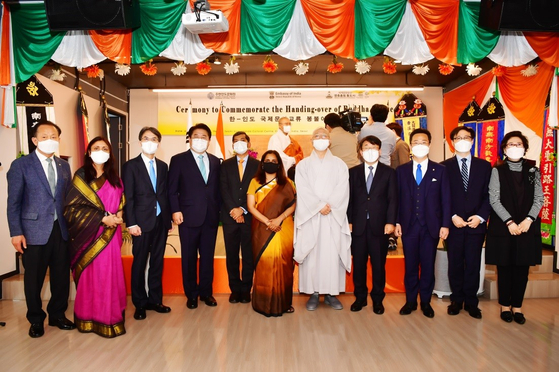 Sripriya Ranganathan, ambassador of India to Korea, sixth from right; Ven. Hyun Moon, head monk of Tongdosa Temple, fifth from right; and Yeo Han-gu, secretary to the president for the New Southern and Northern Policy, second from right, celebrate the gifting of a Buddha statue from the Indian Council for Cultural Relations of New Delhi to Tongdosa Temple in Yangsan, South Gyeongsang. The ceremony was held on Friday at the Swami Vivekananda Cultural Centre of the Embassy of India in Seoul. According to the embassy, the temple enjoys a special connection with India, for it is said to have been built by monks who had traveled to India and become part of the Buddha’s close circle of disciples. [EMBASSY OF INDIA IN KOREA]