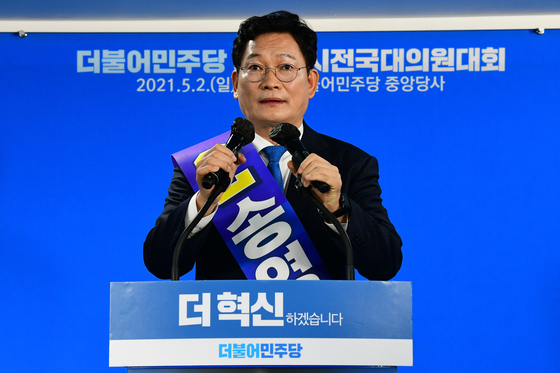 
The ruling Democratic Party (DP) on Sunday elected five-term lawmaker and former Incheon Mayor Song Young-gil as its new chairman as the party seeks a major revamp following its landslide losses in the April regional by-elections.

Song earned 35.6 percent of the ballots cast before and during the party's convention at its Yeouido headquarters, defeating fellow lawmakers Hong Young-pyo and Woo Won-shik, according to the DP’s election commission.

Song won the chairmanship narrowly, edging out Hong by 0.59 percent of the vote.

Song’s election comes during a deep crisis for the DP, whose electoral fortunes have reversed dramatically after it won a majority in the April 2020 legislative elections.

Hit by allegations of sexual harassment and real estate purchases using inside information against some of its most prominent figures, the party was trounced in last month’s regional by-elections, including the Seoul mayoral race which is widely seen as a bellwether for the next presidential election.

Song will now head the party through the presidential election to be held in March, 2022.

In his acceptance speech, Song said, “I will seek the wisdom of the party’s elders while listening to the fresh voices of those in their 20s and 30s.” The demographic breakdown of April by-elections showed that voters in their 20s and 30s had turned against the DP en masse.

He also vowed to focus on changing the party’s platform on real estate, which was widely attributed as one of the root causes of popular discontent with the DP.

Song first entered politics during the 16th legislative elections held in 2000, when he won a seat as the National Assembly representative for Incheon’s Gyeyang constituency. He was re-elected to the National Assembly twice before he ran for the Incheon mayoralty, which he won against conservative incumbent Ahn Sang-soo.

Although he failed to win re-election as mayor, he succeeded in re-entering the National Assembly in the 20th legislative elections held in 2016 and was most recently re-elected to his seat in 2020.

While Song is closely associated with President Moon Jae-in’s camp in the Democratic Party, he is also known to speak his own mind.

In response to the president’s plan to shift away from nuclear power production and exports, Song urged the administration to moderate its speed. In January 2019, Song remarked, “In terms of exports, one nuclear reactor is worth 250,000 sedans or 5 million smartphones.”

In a video message to the party’s convention, President Moon emphasized continuing close cooperation between the Blue House and the DP to pursue reforms to improve people’s livelihoods.

“People are currently asking whether our party has kept up with the changing times and expectations of the public,” Moon said.

"With the election of the new leadership, we will once again become a united team that can lead the recovery and resurgence of Korea.”