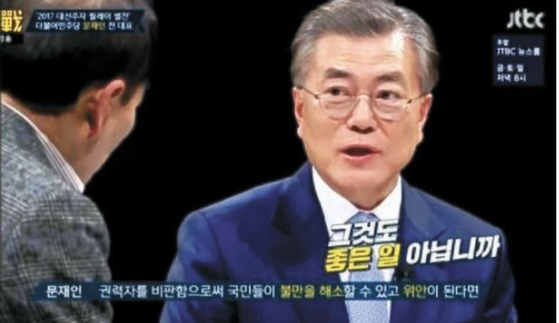 President Moon responds to a question about whether he can tolerate groundless criticism on the Feb. 9, 2017 episode of JTBC talk show ″Ssulzun.″ Moon said he could tolerate it ″because people have the right to criticize.″ [JTBC]


A man accused of distributing pamphlets criticizing President Moon Jae-in has been recommended for indictment for insulting the president.

Yeongdeungpo Police Precinct in Seoul notified 34-year-old Kim Jeong-sik on April 8 that it requested the state prosecution service indict him for distributing leaflets criticizing President Moon and other ruling party figures in front of the fountain outside the National Assembly on July 17, 2019.

In the leaflets, Kim alleged that ancestors of Moon, former Seoul Mayor Park Won-soon and head of the Roh Moo-hyun Foundation Rhyu Si-min had served in government posts under the Japanese colonial administration. On the back, Kim superimposed the words “The red identity of North Korea’s dog President Moon Jae-in” over Japanese pornographic material.

Kim has been under investigation since. His mobile phone was confiscated for three months for forensic analysis, and police reportedly summoned him for questioning nearly 10 times following the incident.

Under Article 311 of Chapter 33 of the Criminal Act, a person found guilty of publically insulting another can spend up to a year in jail or be fined up to 2 million won.

In a phone interview with the JoongAng Ilbo, Kim said police refused to tell him who had reported him for the alleged insult. In Korea, the crime of insult can be only prosecuted if the insulted party reports the individual who allegedly committed the crime.

“I asked them if I was brought in for insulting the president, and they said yes,” Kim said. When he asked them who reported him, they responded, “We think you know already,” according to Kim.

Kim added, “I asked that same question multiple times over the course of questioning, and all they said was that it was obvious who reported me and that they couldn’t say it themselves.”

When the JoongAng Ilbo called the police and asked if the president had reported Kim for insult, they declined to comment.

In response to the police’s decision to recommend Kim for indictment, members of the conservative opposition People Power Party (PPP) claimed intimidation by the government and the ruling party.

Kim Jae-seop, a member of the PPP’s emergency committee, said on Thursday, “If one criticizes the president or those in power, one can now be prosecuted for blasphemy.

“I, too, was once taken in for questioning by police after I public criticized former Justice Minister Cho Kuk’s daughter Cho Min. It is a truly suffocating world these days.”

Cho was forced to step down from his position after it came to light that his daughter used falsified academic credentials and internships in her application to Korea University and later the medical school of Pusan National University.

On an episode of the JTBC show “Ssulzun” broadcast on Feb. 9, 2017, Moon also said of insults, “One must endure them. People have the freedom to criticize those in power. Isn’t it a good thing if people can alleviate their own anger and comfort themselves in doing so?”

With the police, enough is enough