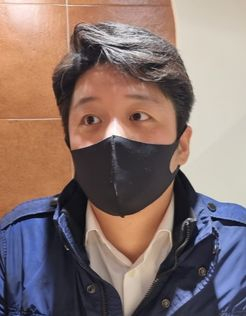 
Kim Jeong-sik, whose impending indictment for committing criminal insult against President Moon Jae-in was canceled after the president withdrew his complaint, had an interview on Tuesday with the JoongAng Ilbo about his experience being under police investigation.

Yeongdeungpo Police Precinct notified 34-year-old Kim on April 8 that it requested the state prosecution service indict him for distributing leaflets insulting President Moon and other ruling party figures in front of the fountain outside the National Assembly on July 17, 2019.

Under Article 311 of Chapter 33 of the Criminal Act, a person found guilty of publicly insulting another can spend up to a year in jail or be fined up to 2 million won ($1,800).

In the leaflets, Kim alleged that ancestors of Moon, former Seoul Mayor Park Won-soon and head of the Roh Moo-hyun Foundation Rhyu Si-min had served in government posts under the Japanese colonial government. Kim also superimposed the phrase “The red identity of North Korea’s dog President Moon Jae-in,” over pornographic material which had once been accidentally uploaded to Moon’s Twitter account before he became president.

When asked why he distributed the leaflets, Kim said, “It seemed to me that [the ruling forces] seek political benefit by framing everything in an anti-Japanese paradigm, even at the cost of national interests. So I brought up suspicions about the family backgrounds of prominent figures in the Democratic Party.

"I wanted them to stop dividing everyone for political advantage by calling themselves patriots and democrats while calling everyone else pro-Japanese collaborators and deep-rooted evil,” he said.

On the illustrations used in the leaflets, Kim expressed some remorse. “I didn’t do the graphic combination myself. I used material from a Japanese magazine. Anyhow, I do feel bad spreading content that would make someone angry or uncomfortable. From one human being to another, I am sorry.”

Kim was under investigation for almost two years after he distributed the leaflets. His mobile phone was confiscated for three months for forensic analysis, and police reportedly summoned him for questioning nearly 10 times following the incident.

“When they took my phone for forensic analysis and couldn’t open it because of the passcode, they used video footage of me unlocking my phone to determine the passcode pattern. I’m not sure that’s legal.”

Regarding his decision to distribute the leaflets, Kim said, “Back when he was a candidate, President Moon said that he would accept criticism, so I didn’t think he would report what I did. I thought someone like Rhyu, who is no longer a public official, might sue, but I didn’t think the president would.”

On an episode of the JTBC show “Ssulzun” broadcast on Feb. 9, 2017, Moon had said of insults, “One must endure them. People have the freedom to criticize those in power. Isn’t it a good thing if people can alleviate their own anger and comfort themselves in doing so?”

Kim said the fact that police investigated him for two years without revealing who had filed the complaint was the most frustrating aspect of the experience.

“I tried not to think of it too seriously,” Kim said, but he also said that by the end of 2019 a bald patch the size of a quarter had appeared on his head. “I have a full head of hair now,” he joked.

When asked where he thinks the line is drawn between freedom of expression and insults, Kim said, “The line between the two is power. People have described previous presidents as rats and chickens, and former President Park Geun-hye even had her head imposed on a nude body. Is one thing okay, and the other not?”