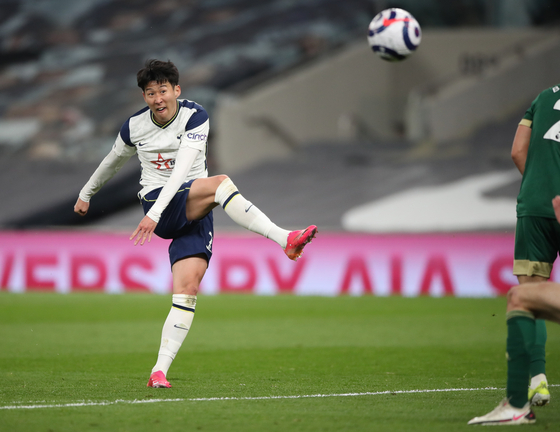 
It was the Gareth Bale and Son Heung-min show on Sunday as Tottenham Hotspur romped to an easy win over Sheffield United to move up to fifth place in the Premier League with just a few games left to play this season.

With interim manager Ryan Mason still at the helm, Spurs beat an uninspired Sheffield 4-0 with a hat trick from Bale at Tottenham Hotspur Stadium in London, appearing to put the last two weeks of turmoil behind them with an inspiring display of world class football — even if it was against the single worst side in the Premier League today.

Spurs were knocking on the door from the whistle, with both Son and captain Harry Kane narrowly missing opportunities in the 17th and 18th minutes. It wasn't until the 36th minute that Bale actually opened up the scoring, sending a well-placed Serge Aurier pass over Sheffield keeper Aaron Ramsdale's head for the opening goal of the game.

Despite a lot of chances, that was it for the first half and Spurs went into the break with a 1-0 lead.

The second half started with Tottenham clearly hungry for more. Son scored a goal in the 50th minute, picking up the ball near the halfway line and outpacing two defenders before beating Ramsdale, only to have the goal disallowed because he was ruled offside.

Not to be deterred, Spurs returned in the 61st minute with Bale's second goal of the game, assisted by Son, again beating Ramsdale with a well-placed shot into the top-right corner.

It wasn't long before Bale completes his hat trick — his first in the Premier League since 2012 — with a low shot into the bottom-right corner assisted by Aurier.

Up 3-0 with 20 minutes still to play, Spurs continued to hammer on the door with Son's chance coming in the 77th minute. It was another showstopper from the Korean forward, who turned inside the defender at the edge of the box, taking a single touch and sending the ball curling 18 meters (20 yards) across the goal and into the top right corner.

The onslaught slowed down in the last few minutes of the game — although there was very nearly No. 5 in the 90th minute — and Spurs walked off with a big 4-0 win to take fifth place in the Premier League with four games left to play. Sheffield remain in last place where they are already guaranteed to be relegated at the end of the season.

Sunday's victory follows two weeks of turmoil for the London club that briefly joined the breakaway Super League, fired manager Jose Mourinho, left the Super League and lost the Carabao Cup final to Manchester City. With interim manager Mason still at the helm, Tottenham's goal at this stage has got to be surviving the last few weeks of the season without getting roughed up too much.

Yet despite all the problems, Spurs didn't look like a side that was just surviving in Sunday's game. Instead, they played with the flair that was briefly visible when Tottenham got off to a flying start at the beginning of the season.

Admittedly, Sheffield were the easiest opponents they could have faced, but Spurs' performance will give fans, and possibly a new manager, something to be hopeful about.

Across all competitions, Son has scored 21 goals with 17 assists this season.