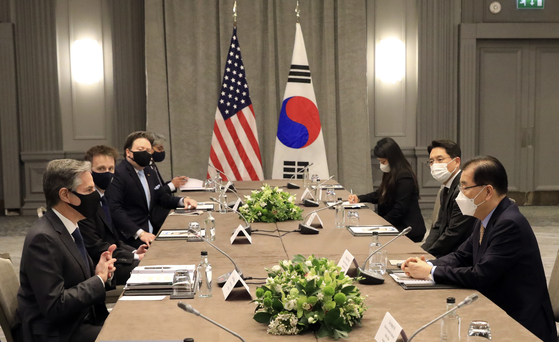 “I hope that North Korea will take the opportunity to engage diplomatically and to see if there are ways to move forward toward the objective of complete denuclearization of the Korean Peninsula,” Blinken said in a joint press conference with his British counterpart, Dominic Raab, on the sidelines of a G7 foreign ministerial meeting.

Blinken's remarks follow the completion of the Joe Biden administration’s comprehensive review of North Korea policy, which aims to advance the goal of the "complete denuclearization of the Korean Peninsula.”

The top U.S. envoy said that Washington will “see not only what North Korea says but what it actually does in the coming days and months,” indicating that the ball is now in Pyongyang’s court.

Blinken underscored that the Biden administration has “a very clear policy that centers on diplomacy,” adding it is “up to North Korea to decide whether it wants to engage or not on that basis.”

His remarks came as Pyongyang upped its bellicose rhetoric against Washington in recent days, warning of possible future provocations. On March 25, North Korea fired two short-range ballistic missiles into the East Sea, a violation of UN Security Council resolutions and the first such test in around a year. However, Pyongyang has maintained a self-imposed moratorium on nuclear test and long-range missile launches since late 2017.

The White House on Friday announced that it had concluded its review of North Korea policy which will opt for a “calibrated, practical approach,” finding a middle ground between a “grand bargain” sought under the Donald Trump administration and the so-called strategic patience of the Barack Obama government.

Blinken said in the London press conference that the Biden administration’s review recognized that North Korea’s denuclearization was an “incredibly hard problem” that has yet to be solved by numerous administrations and takes into account “what works, what doesn’t work.” The United States, he said, is “actively consulting with all of the concerned countries, starting with our close allies South Korea and Japan, given their own very strong equities in this issue.”

Earlier, South Korean Foreign Minister Chung Eui-yong and Blinken held bilateral talks on the sidelines of the Group of Seven meeting Monday, in which the top U.S. diplomat shared the outcome of the U.S. policy review on North Korea as the two sides discussed the broader situation on the Korean Peninsula as well as regional and global affairs.

Chung “welcomed that the outcome of the review had been determined in a practical and substantive direction," the South Korean Ministry of Foreign Affairs said in a statement.

They agreed to “continue close coordination to achieve complete denuclearization and establish permanent peace on the Korean Peninsula.”

The two diplomats agreed to cooperate for a successful summit between President Moon Jae-in and Biden scheduled for May 21 in Washington.

Blinken relayed that Biden is looking forward to meeting with Moon and that holding a face-to-face summit in the early days of his presidency in spite of the Covid-19 pandemic is a “reflection of the importance that the United States places on the Korea-U.S. alliance, as well as the fact that the alliance is developing into a comprehensive relationship,” the Foreign Ministry added.

The two envoys also committed to strengthening cooperation between the New Southern Policy, the Moon administration’s initiative for economic and diplomatic cooperation with Asean countries and India, and the U.S. initiative in the Indo-Pacific region. They also agreed to work together on global issues such as Covid-19 vaccines and climate change.

U.S. State Department spokesman Ned Price said in a statement that Chung and Blinken “stressed their commitment to work together to protect and advance shared security goals, including U.S.-Japan-ROK trilateral cooperation toward the denuclearization of the Korean Peninsula,” referring to the South’s official name, the Republic of Korea.

In a bilateral meeting with Japanese Foreign Minister Toshimitsu Motegi, Blinken “shared their concerns about North Korea’s nuclear and ballistic missile programs and reaffirmed their commitment to address and resolve these issues through U.S.-Japan-Republic of Korea trilateral cooperation," the State Department said in another statement. A trilateral meeting between Chung, Blinken and Motegi is also expected to be held in London Wednesday.

Blinken last held talks with Chung in mid-March in Seoul during a joint trip to Korea and Japan with U.S. Defense Minister Lloyd Austin.

South Korea was invited as a guest — along with Australia, India, South Africa and Brunei — to the G7 foreign and development ministers' talks which run through Wednesday, and Chung flew to London Sunday. Moon is also invited to the three-day G7 summit to be held in Cornwall from June 11 to 13.

Apparently mindful of the completion of the U.S. policy review and the upcoming summit between Seoul and Washington, a senior North Korean Foreign Ministry official in a statement called out Biden for making a “big blunder,” in reference to an address to the U.S. Congress last week, and warned of a possible “grave situation.”

The U.S. Defense Department Monday said it will “support diplomatic efforts” toward the denuclearization of North Korea, but confirmed that the administration’s policy toward Pyongyang does not affect Washington’s alliance with Seoul, nor its defense commitments on the Korean Peninsula.

Pentagon spokesman John Kirby said in a briefing, “We stand in support of the State Department as they pursue peaceful, political, diplomatic options to make the region safer and more secure,” including from “the threat that North Korea continues to pose.”

He added, “One thing that hasn't changed is our commitment to the treaty alliance with South Korea.”