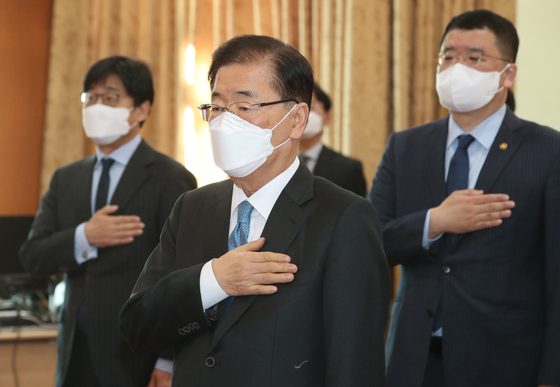 Chung Eui-yong is inaugurated as the new Korean foreign minister at a ceremony held at the Foreign Ministry complex in central Seoul Tuesday. [NEWS1]

New Foreign Minister Chung Eui-yong said Tuesday that complete denuclearization of the Korean Peninsula is a goal shared between Seoul and Washington and a “key task that cannot be delayed any further.”

Chung, who was sworn in as South Korea’s top diplomat earlier that day, said in his first press conference at the Foreign Ministry in central Seoul, “Since achieving the complete denuclearization of the Korean Peninsula as early as possible is a joint goal between South Korea and the United States, I believe we will be able to easily coordinate our opinions on how to achieve this.”

He noted that while there are many items on the agenda between Seoul and Washington, “fundamentally, there are no big differences in positions between South Korea and the United States.”

Addressing concerns that Seoul and Washington may not see eye-to-eye on Pyongyang policy, Chung said, “Since the Korea-U.S. alliance is ironclad, I believe that there are no major problems in coordination, even if there are some differences in opinions.”

On the possibility of a first face-to-face meeting with new U.S. Secretary of State Antony Blinken, Chung said he plans to “communicate with the United States as soon as possible” and that he looks forward to such a meeting taking place soon.

In their first phone call last week, President Moon Jae-in and U.S. President Joe Biden agreed on the need to work together on a “comprehensive North Korea strategy" soon.

Chung served as director of the Blue House National Security Office from May 2017 to July 2020 and played a mediator role in the denuclearization negotiations between Pyongyang and Washington during the Donald Trump administration. He served as a special presidential adviser on foreign affairs, diplomacy and national security prior to his nomination as top Korean diplomat last month.

Chung indicated that South Korea is open to supporting the Quadrilateral Dialogue, or Quad, a security cooperation mechanism between the United States, Japan, Australia and India.

The Biden administration wants to strengthen the Quad mechanism, established under the Donald Trump administration as a way to contain China, and has proposed a first Quad summit. Washington has also been urging closer trilateral cooperation between its closest allies in the region, Seoul and Tokyo.

“Regarding the Quad issue, we believe that we can actively cooperate with any regional cooperative system provided that the mechanism is transparent, open, inclusive and complies with international norms,” Chung said.

Jake Sullivan, Biden’s national security adviser, said last week at a United States Institute of Peace event that the White House sees the Quad as “a foundation upon which to build substantial American policy in the Indo-Pacific region.”

Addressing Sino-U.S. tensions, Chung noted that there are areas in which U.S. and Chinese interests coincide, such as climate change, Covid-19 disease control efforts and establishing peace on the Korean Peninsula. “South Korea may be able to play a role in building trust between the United States and China,” he said.

He also stressed the importance of both countries to Seoul.

“Our government is closely watching changes in the regional situation, and we take seriously such changes in the situation because they can provide both challenges and opportunities,” said Chung. “The United States and China are both important countries to us. The Korea-U.S. alliance is, without a doubt, a linchpin for our peace and prosperity. China is our strategic partner and also our largest trading partner and a very important partner for peace on the Korean Peninsula.”

Chung stressed in his inauguration speech earlier that morning that the Korean Peninsula peace process, including complete denuclearization and a lasting peace, is "not a choice but a path that must be taken.”

Acknowledging the “difficult situation” of the current diplomatic climate, he said, “We are at a point in time where pre-emptive and strategic diplomacy is required as uncertainty in the international situation deepens.”

Chung emphasized the need for Seoul to further develop its alliance with Washington in a “more sound, mutually beneficial and comprehensive manner,” calling the United States the “foundation of our diplomacy.”

He also urged efforts to work with other key partners including China, Japan, Russia, Asean and the European Union to achieve regional peace and prosperity.

A career diplomat, Chung was a former ambassador to the United Nations in Geneva and served in countries including the United States, Israel and Belgium.

Chung replaced Kang Kyung-wha, who served as Moon’s first foreign minister since June 2017, a tumultuous time in Seoul’s relations with its neighbors.

Kang told reporters in her farewell speech Monday that serving as Korea’s first female foreign minister was the “honor of my lifetime.”

She said that she expects Chung, who has played a key role in the Korean Peninsula peace process, to be “best suited” to helm the ministry at a “critical period for our diplomacy and inter-Korean relations.”