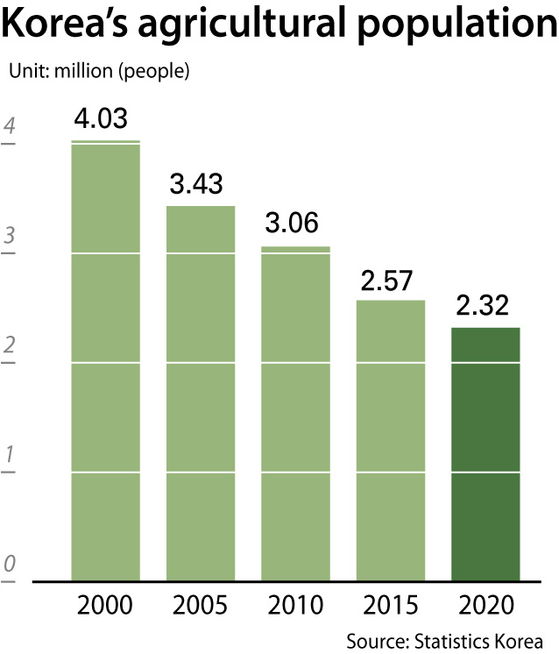 The agricultural industry is experiencing severe labor shortages as the Covid-19 pandemic acts as a huge obstacle to employing foreign workers.

A 67-year-old farmer surnamed Min runs a blueberry and persimmon farm. Although farming season is approaching, it’s almost impossible to find workers to work on the farm. For an industry that heavily relies on migrant workers, strict entry regulations brought in because of the pandemic are a big hindrance.

Farmers used to help each other out during the busy season, but not anymore. Lending a helping hand is not easy when the farming population is aging and decreasing.

According to Min, all of the villagers used to be farmers, but only five are able to work the land today.

“I'm doing okay [despite the shortage of extra hands] because it's not labor intensive," Min said. "But those whose produce is high maintenance, such as onions, sesame and pepper, are panicking. In the case of onions, they need to be harvested in May and June. Those that couldn't find the extra workers say they might have to not only give up on this year's harvest, but may have to quit farming onions entirely next year."

The rapidly-aging population in the farming community has become a chronic problem that has become more apparent during the Covid-19 pandemic.

That means that the age of farmers has already exceeded the working age, considered the most economically productive, between 15 and 64.

The biggest age group among farmers was 70 or older, accounting for 39.8 percent of farmers. The second biggest group were those in their 60s at 33.4 percent. People in their 50s only accounted for 19.4 percent. Farmers in their 40s and 30s or under were harder to find, making up just 6 percent and 1.2 percent, respectively.

With a lack of inflow of young people to farming villages, the agricultural population has shrunk rapidly. Last year there were 2.31 million people in farming communities. That figure has dropped from 3.06 million in just 10 years and 4.03 million in 20 years.

The forestry and fishing sector is no different.

"The declining population in farms and fishing villages, as well as the aging population, is likely to continue," said Hong Yeon-kwon, division chief of Statistics Korea’s Agriculture and Fisheries Statistics Division.

The demographic changes in these rural areas is not only an issue restricted to farms and fishing villages — it affects everyone and their dinner table.

Last year, agriculture and fishery goods prices surged, largely on the back of the unusual weather, but the lack of workforce in farming villages due to Covid-19 also played a significant role.

Crops that are harvested without the use of machines were hit the hardest. As such, the recent spike in onion and leek prices is expected to become a recurring problem.

While the government is coming up with countermeasures, which include plans to increase foreign labor supplies, introducing city dwellers seeking jobs to farms and subsidizing labor costs, experts say these are only temporary solutions that don't tackle the fundamental issue.

“The local horticulture and livestock sectors are inoperable without migrant workers,” said Im Jeong-bin, a professor at Seoul National University’s Department of Agricultural Economics and Rural Development. “This is an impediment of Korean agriculture, being labor intensive but offering low pay.”

Im added that Korea needs to increase the number of seasonal workers and adapt smart farming technologies by mechanizing and automatizing farming.

A love of labor